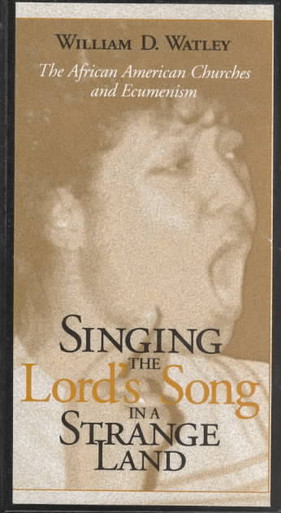 "In the long night of struggle and search for meaning," the author asks, "what has kept African Americans from nihilism or capitulation to the assaults of 'outrageous fortune'? What anchored their souls in trouble, stabilized their psyche, kept their hearts from drinking the bile of hatred and put heaven in their view even as they labored int he midst of hellish realities?" William Watley says there can be only one answer: the African American religious enterprise and its major institutional embodiment, the African American churches-- "the independent indigenous institutions of a 'third-world people in a first-world context.'"

Here is an informed and popularly written portrait of these churches, focusing on the seven so-called historic black churches-- three Methodist, three Baptist, and one Pentecostal-- and depicting their worship life, international mission, theological enterprise, and ecumenical relationships. Although the total U.S. membership of these churches is nearly 22 million, they are often misunderstood in their own country and little known outside it. This book is aimed at correcting that ignorance and thus enriching global ecumenical understanding.

ABOUT THE AUTHOR
THE REV. WILLIAM D. WATLEY is minister of St. James African Methodist Episcopal Church, Newark, New Jersey. He was been active in several major international ecumenical meetings, including the WCC's world convocation on "Justice, Peace, and the Integrity of Creation" (Seoul, 1990) and the seventh assembly (Canberra, 1991), where he was a delegate of his church.