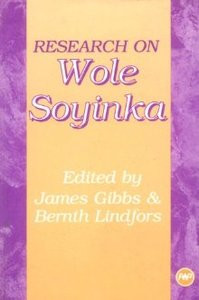 The aim of this book is to provide a reasonably broad introduction to the works of Soyinka and to the varieties of criticism they have elicited. There are many different critical methodologies represnted, ranging from those concerned with verbal texture (linguistic, structural and textual approaches) to those focusing on cultural context (historical, mythological and comparative studies). One will also find plenty of metacriticism-- critics quarreling with one another about fine points of interpretation or surveying a wide range of response to a particular text or issue. Soyinka's complex, nuanced art affords and inexhaustible source of stimulation to sensitive readers, so it is hardly surprising that there are so many different readings of his works. The essays collected here will not bring an end to appraisals of the achievements of one of Africa's most abundantly gifted writers. This book is meant merely as an appetizer for the feast of commentary to come.

ABOUT THE EDITORS
JAMES GIBBS, Senior Lecturer in English at the Unversity of Liege in Belgium, is the author of Wole Soyinka, the editor of Critical Perspectives on Wole Sonyinka, and one of the compilers of Wole Soyinkas: A Bibliography of Primary and Secondary Sources. He has also written numerous essays on other African dramatists, novelists, poets, and literary critics.

BERNTH LINDFORS, Professor of English and Africa Literatures at the University of Texas at Austin, is the founding editor of Researc in African Literature and the author of several critical studies, the most recent being Popular Literatures in Africa. he has also complied bibliographies and edited more than a dozen books on African oral and written literatures.