REPERCUSSIONS OF THE ATLANTIC SLAVE TRADE: The Interior of the Bight of Biafra and the African Diaspora, Edited by Carolyn A. Brown and Paul E. Lovejoy 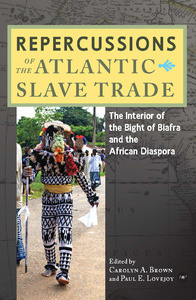 REPERCUSSIONS OF THE ATLANTIC SLAVE TRADE: The Interior of the Bight of Biafra and the African Diaspora, Edited by Carolyn A. Brown and Paul E. Lovejoy

This volume looks at the historical context of slavery in the interior of the Bight of Biafra and the resulting diaspora of people that was formed in the Americas. The Bight of Biafra has a sordid yet fascinating history because of the intense connection with slavery, first as one of the main sources of enslaved labor for the Americas and then because of the continuation of forms of slavery into the nineteenth and twentieth century. Enslaved victims figured prominently in trade in the interior of the Bight of Biafra from at least the early eighteenth century and probably earlier still. The scale of enslavement was massive, accounting for the 1.6 million people who were forced to embark on slave ships for the Americas. If the numbers of people who were enslaved but never left the region are also included, than the total demographic displacement through slavery was considerably more than this figure.

The contributors to the volume include scholars from universities in Nigeria, Europe and North America and are based on a conference held in Nigeria in 2000.

The interior of the Bight of Biafra is arguably the most crucial region in West Africa in the understanding of slavery, the Trans-Atlantic Slave Trade, the Atlantic World, the African Diaspora, and the Black Atlantic. This volume, dedicated to the late Professor Adiele Afigbo, the most distinguished historian of Southeastern Nigeria, takes on the multiple task of exploring various dimensions of the relevance of the Bight of Biafra in scope, time and relevance, with an admirable systematic and rigorous approach, revealing the strength of collaborative endeavors, the distinction of academic leadership by Brown and Lovejoy, and the profit of intelligent, succinct, and comprehensive treatment of a major region.

CAROLYN A. BROWN, Associate Professor of History, Senior Editor of International Labor and Working Class History and former Director of African Studies at Rutgers University, is a labor historian and specialist on slavery and colonialism. Her study of coal miners and rural protest in southeastern Nigeria has explored the struggles to confront the legacies of slavery in Nigerian society and the ways in which popular culture interprets history.

PAUL E. LOVEJOY, Distinguished Research Professor and Fellow of the Royal Society of Canada, holds the Canada Research Chair in African Diaspora History and is Director of the Harriet Tubman Institute for Research on the Global Migrations of African Peoples at York University. His research focuses on the life histories of enslaved Africans as a reflection of the social history of Africa and the African diaspora during the era of trans-Atlantic slavery.