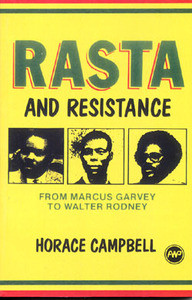 Rasta and Resistance is a study of the Rastafarian Movement in all its manifestations, from its evolution in the hills of Jamaica to its present manifestations in the streets of Birmingham and the Shashamane Settlement in Ethiopia. It traces the cultural, political and spiritual sources of this movement of resistance, highlighting the quest for change among an oppressed people. This book serves to break the intellectual traditions which placed the stamp of millenarianism on Rasta.

"Absence of a political enquiry into the Rastafari of the Caribbean has always been an uncomfortable gap in the record of the Caribbean revolution. Now Horace Campbell has bade a big step towards the filling of that gap. This is not to suggest that Caribbean writers and thinkers (we should not confuse the two groups) have not done much investigation of the Rastafari way of life with all the clarity and depth which their areas of investigation permitted them; some have also ventured into the political dominion. Campbell has many of the qualifications for the task he has undertaken. He has been struggling for some years to apply the scientific theory of society to the reality of African and Caribbean politics, and in the process has avoided the creation of false gods."

Horace Campbell was born in Montego Bay, Jamaica in 1945. He is a writer, teacher and political activist who has taught in Africa, the Caribbean, Britain, and North America. His writings include two books: Four Essays on Neo-colonialism in Uganda and Pan-Africanism: The Struggle Against Neo-colonialism and Imperialism as well as numerous articles, papers and essays which have been published in various journals in Britain, North America, the Caribbean and Africa. Since 1981, he has been teaching at the University of Dar-es-Salaam in Tanzania, East Africa.