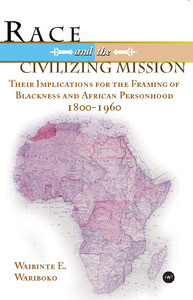 Europeans had militarily subjugated and occupied Africa in part because they were on a “civilizing mission” to rescue Africans from savagery and barbarism. This book explores one central question, among many others, while interrogating and problematizing this notion: How does understanding “race” help us to better appreciate the subtle ideological motivations and underpinnings of the European “civilizing mission”? The latter notion, it is painstakingly argued, was engendered by the former as an instrument for propagating and glamorizing whiteness at the expense of blackness. Given this cultural tension between whiteness and blackness it became necessary and imperative, during the phase of decolonization, to challenge the philosophical basis of the “imperial knowledge system” that had initiated and defended the rule of “race” and the “civilizing mission” in Africa.

That intellectual process of challenging the “imperial knowledge system,” for many African anti-colonial activists, publicists, and scholars, was also an exercise in identity reconstruction; and the inspiration for this exercise was in part derived from the race-oriented values of Pan-Africanism, Negritude, and Black Consciousness. Not surprisingly, that engagement in due time became known as the “historiography of self-assertion.” By discussing and analyzing these ideologically driven and value-loaded forms of historical writing over time, this book has contributed to the re-contextualizing of the debate on knowledge production about Africa and blackness; the general revaluation of “evidence” in the evolving construction of race-based group identities between 1800 and 1960; and the overall interconnectedness between the production of knowledge, its delivery and consumption, and the global politics of identity construction.

ABOUT THE EDITOR
Waibinte E. Wariboko has authored Planting Church-Culture at New Calabar: Some Neglected Aspects of Missionary Enterprise in the Eastern Niger Delta, 1865-1918; and Ruined By “Race”: Afro-Caribbean Missionaries and the Evangelization of Southern Nigeria, 1895-1925. He is also the author of numerous book-chapters and journal articles.