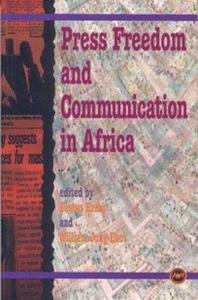 The significance of press freedom in contemporary society and the attitudes of governments to freedom of expression and democratic practices have taken on a new garment since the end of the cold war. In Africa, a strong awareness of the advantages of a free press and the inalienable rights of the people to unfettered communication has sparked an unstoppable demand for freedom of the press across the continent. The increase in the number of independent newspapers, radio, and television stations on the one hand and the frequency of government censorship of press and arrests of journalists on the other hand are evidence of a continent at a crossroads.

In this volume, twenty communications scholars examine, from a variety of perspectives, the past, and present developments in Africa's quest for press freedom. The essays focus on the media in Anglophone, Arabic speaking, Francophone, and Lusophone Africa, capturing the inherent problems and benefits-where they exist-of colonial legacy and the fragility of press freedom in the fledgling post-colonial administrations bedeviled by the underdevelopment and political instability.

As essays in this volume reveal, Africa's unquenchable thirst for freedom of expression continues to play a central part of the socio-political and economic spheres from Cape Town to Cairo and from Accra to Dar es Salaam. The authors' analytical approach to the subject matter provides a fresh understanding of the historicity, complexities, difficulties of the mass media on a continent in search of "a free market place of ideas."

ABOUT THE EDITORS
FESTUS ERIBO is associate professor of international communication at East Carolina University, Greenville, North Carolina. He received his Ph.D. in mass communications from the University of Wisconsin-Madison. He is co-author of Window on Africa: Democratization and Media Exposure.

WILLIAM JONG-EBOT is director at Alpha Communications and Consultants International in St. Petersburg, Florida. He received his Ph.D. in mass communications from the University of Wisconsin-Madison.