POLITICAL WOMEN IN MOROCCO: Then and Now, Osire Glacier 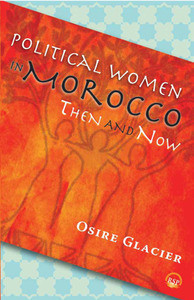 POLITICAL WOMEN IN MOROCCO: Then and Now, Osire Glacier

Political Women in Morocco: Then and Now is a collection of the biographies of thirty-four political women. It demonstrates that Moroccan women participated actively in the political sphere throughout antiquity and to the present-day. Women governed as Queens, as did Tin Hinan, or as de facto Queens as did Zaynab al-Nafzawiyya. Khnata bent Bakkar exerted her power as a vizier, while Hakimat Tetouan and Subh, respectively, ruled as leaders or as regents. Lalla Aziza Seksawiya mediated political conflicts, while the warrior Kahina confronted her enemies on the battlefield. The Caïda (tribe leader) Chamsi az-Ziwawiya governed her tribe. Kenza al-Mardhia provided political counsel, and women like Sahaba served as ambassadors to European and Middle-Eastern nations. Women initiated major public infrastructure projects, as did Ouda al-Wazkitia, and charmed royal courts with their poetry as did Hafsa ar-Rakuniya. Some, like Zidana, used their power tyrannically for personal reasons, while others like Kharboucha and Taougrat used their power to struggle against central or colonial powers. Women like Malika al-Fassi helped build the modern Moroccan state. Saïda Menebhi, and other female activists, sacrificed their lives for democratic ideals, social equality and international justice. Latifa Jbabdi modified masculine perceptions of democracy, and female politicians like Hakima Chaoui confronted radical Islamists. Khadija Rhamiri, and other female unionists, feminized the world of unions. Khadija Ryadi worked tirelessly for the advancement of fundamental rights. Young women, including Nidal Salam Hamdache, struggled for the advent of social democracy from within the February 20 Movement. Today, women like Aïcha Mekki, work efficiently and discreetly for social and political change.

Osire Glacier, PhD is a Professor in the Department of History and the Department of Political Science & International Studies at Bishop’s University (Sherbrooke, Canada). She teaches the courses “Gender and Politics” and “The History of the Middle East.” Gender constitutes both a privileged topic and an analytical tool of her teachings.  Similarly, by applying feminist approaches in her research, the author contributes to deconstructing the dominant historiography where history and politics are often masculinized.