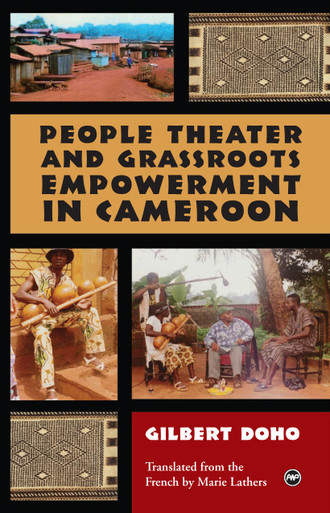 In the late 1990s, Gilbert Doho, then professor of theater at the University of Yaounde, Cameroon undertook with a colleague the establishment of people theater workshops throughout the country, which was in political and social turmoil. In "People Theater and Grassroots Empowerment in Cameroon," Doho introduces the history of this artistic genre in Cameroon; and presents in fascinating detail several of the workshops he and his colleague set up. In East Cameroon, they worked with local Mekong people to create a play, "Alien in My Land," modeled after the story of the prodigal son and staging the deforestation of the homeland by Western developers. In "The Visionary of the Sacred Wood," women become activists to salvage the sacred area of their village; in "Little Spice," the problems of sexuality, HIV, and AIDS are explored, in "Forced Marriages" human rights violations are strongly condemned.

"People Theater" is a text that is both scholarly and personal. The book is personal history, political tract, performance manual and drama collection (two of the plays are transcribed in the appendices). In Part One, Doho examines the origins and evolution of people theater on the African continent; in Part Two, the process of creating people theater is presented, with examples of five workshops dealing with community health, human rights, minority issues, and other contemporary concerns in Africa; Part Three cites certain aesthetic requirements and limitations associated with people theater practice. Throughout, the reader becomes familiar with Cameroons history, political situation, and multiple ethnic groups.

ABOUT THE AUTHOR
GILBERT DOHO is Associate Professor of French and Francophone Studies in the Department of Modern Languages and Literatures and Director of Ethnic Studies Program at Case Western Reserve University, Cleveland Ohio. He received his Doctorat dEtat (Ph.D.) at the University of Sorbonne Nouvelle and has taught at the two Universities of Yaounde, Cameroon, and State University of New York at Albany. Among his fiction and critical essays are "Au-dela du lac de nenuphars/Beyond the Lilies Lake," (2004), "Le Crane/The Skull" (1995), and "Noces de Cendres/Wedlock of Ashes" (1996).

ABOUT THE TRANSLATOR
MARIE LATHERS is Treuhaft Professor of Humanities and French at Case Western Reserve University, Cleveland Ohio. She received her Ph.D. in 1990 from Brown University. Her areas of specialization are 19th century French literature and art, the relationship between literature and the visual arts (painting, sculpture, photography, and film) and feminist theory. She has published articles in scholarly journals including "The French Review," "Mosaic" and "Womens Art Journal" and two books, one of which is "Bodies of Art: French Literary Realism and the Artists Model" (2001).