PEOPLE POWER AND DEMOCRACY: The Popular Movement against Military Despotism in Nigeria, 1989-1999, by Rita Kiki Edozie 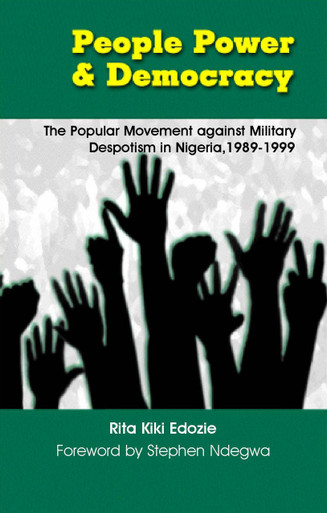 PEOPLE POWER AND DEMOCRACY: The Popular Movement against Military Despotism in Nigeria, 1989-1999, by Rita Kiki Edozie

PEOPLE POWER AND DEMOCRACY The Popular Movement against Military Despotism in Nigeria, 1989-1999 was spurred by the annulment of the 1993 presidential election in Nigeria, an arbitrary action of the military regime of General Ibrahim Babangida. The exercise which had been widely acknowledged as the freest and fairest election ever held in the country, had produced, for the first time in the checkered history of the West African nation, a southerner, the late Chief Moshood Abiola, as the nations [third] democratically-elected president.

Capturing the essence of this unique historical event in Nigeria, this book highlights the consequential growth and development of a formidable resistance movement against arbitrary military rule in the country, manifested in the emergence of various national pro-democracy and human rights activist groups. Among these were the Campaign for Democracy (CD), the National Democratic Coalition (NADECO), and the United Democratic Front of Nigeria (UDFN). The intense political activities and unyielding agitation of these populist groups in the 1990s ultimately led to the downfall of the Babangida regime in 1993 and eventually paved the way for the return to democratic governance in the country and the establishment of Nigerias Fourth Republic in 1999.

In this landmark publication, Rita Kiki Edozie provides in-depth scholarly analyses of the activities of the various groups within the Nigerian pro-democracy movement from 1989 to 1999, with a view to facilitating a general understanding of the political dynamic in Nigeria during the turbulent ten-year period. She examines the groups various efforts at social mobilization of Nigerias civil society in the process of collective action against corrupt and arbitrary military rule. She puts to careful scrutiny the strategies, behavior patterns and actions of the individual groups and their combined efforts to facilitate a popular-based democratic transition for Africas most populous nation.

This is a serious and highly critical, but well-balanced study on Nigerias turbulent national politics during the last decade of the twentieth century. It culminates with an optimistic prognosis that anticipates the countrys political recovery and the sustenance of popular democracy in the advent of a new century and millenium.

ABOUT THE AUTHOR
Rita Kiki Edozie traces the roots of her political activism to her undergraduate years at Nigerias former University of Ife (now Obafemi Awolowo University) Ile-Ife, where she studied English and Dramatic Arts at the Universitys Faculty of African Studies in the early 1980s. She earned her doctorate degree from the New School for Social Research, New York City, in 1999 focusing her research on Democratic Theory, Comparative Democratization, and Socio-Economic Stratification.

Dr. Edozie was Deputy Director of the Institute of African Studies at Columbia University's School of International and Public Affairs (SIPA), and visiting Assistant Professor with the Department of Political Science and International Relations at the University of Delaware. She is currently Assistant Professor of Political Science at James Madison College, Michigan State University East Lansing.