ON THE MARGINS: Race, Gender, and Empire, by O.R. Dathorne 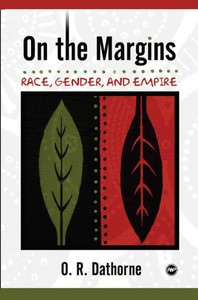 ON THE MARGINS: Race, Gender, and Empire, by O.R. Dathorne

On the Margins:Race, Gender, and Empire focuses on the role which “minority” writers adopt, particularly in English. The book examines how the minority, at times, the invisible, presence is related, classified and designated within majority culture. Dathorne illustrates how the majority onlooker intended to view and perceive the “other,” as early as the fifteenth and sixteenth centuries. Monstrous races, gruesome objects and marvelous occurrences were all located outside the sphere of the majority culture. He utilizes his global knowledge in order to investigate varied responses to culture among Africans, African-Americans and Indians.

In the book, Dathorne devotes two chapters to intertextual theory in order to demonstrate how the “master” text—a term he abjures in favor of X and Y—influences and is influenced by the minority text. He shows how postcolonial theory, once it is not engaged in the process of essentializing writings, may often be of importance in articulating the voice of the “them,” particularly as it differs from “us.”

O.R. DATHORNE pursued graduate degrees in English in the UK, and in business and politics in the U.S. Born in Guyana, South America, he taught in Africa for ten years and worked with UNESCO. In 1969, at the invitation of Yale, he first came to the United States, later teaching as full professor at Howard, the University of Wisconsin, Ohio State University, Florida International University, SUNY-Binghamton, and the University of Kentucky. He wrote several other critical texts, three novels and two books of poems. He was the editor of the Journal of Caribbean Studies.