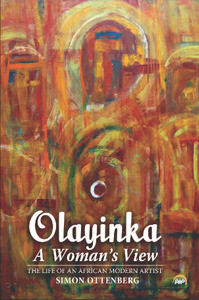 Miranda Olayinka Burney-Nicol, who signed her work OLAYINKA, was a pioneer in modern African art. She belonged to the first generation of African artists who did not follow indigenous art practices, but drew on a variety of European media while experimenting with them, yet her images were generally drawn from Africa. Born in 1927 into Creole (Krio) society in the capital city of Freetown, Sierra Leone, West Africa, she was raised in an Africanized version of British culture, studying in a missionary school.

After teaching for a year in the country’s interior, a scholarship brought her to New York City for five years, with side visits to Indiana and Mexico, studying the arts and the humanities. She was also a professional storyteller of African tales, and a singer and dancer. She then studied murals and oil panting at a London art school, while also spending time in France, Germany and Spain, meeting artists and viewing European art. She returned to Sierra Leone in 1958 and for the next ten years she was the Government Artist, assisting the development of the visual arts in preparation for the country’s 1961 independence and afterwards, during which time she produced a number of murals for the government while maintaining a private art practice. For the next twenty years she created art in Freetown, with trips to Europe, Lagos, Nigeria and Lusaka, Zambia, to exhibit and to study, before going to live in England in 1988 to continue her art career.  She died in 1996

Olayinka saw her life and art as the fusion of African and Western cultures. On the African side she was not only interested in the culture of her birth, itself a fusion, but in the indigenous cultures of the country’s interior, and she drew into her art visual materials from elsewhere in Africa, particularly Egypt, and also Mexico and China. She created in a wide range of media: drawings, oil paintings, public and private murals, watercolors, tempera, monotypes woodcuts, linocuts, collages, constructions created out of materials from a Freetown market, incised wooden tablets, and she decorated indigenous and commercial cloth, designing clothing, chairs, tables, and house screens. She had a fashion show in Freetown and another in Paris based on indigenous textile materials,

A strong feminist, Olayinka was only briefly married, forsaking the usual African modern artist’s life as a teacher to live and work as an independent artist. She struggled to sell her work in Freetown, where modern art was just beginning to be known, and in Europe where simplistic views abounded as to what a modern African artist should create. A restless individual, her many travels paralleled her movements from media to media. “I am a ship at sea,” she once proclaimed.

Olayinka’s visual themes included the mother and child, the family, the beautiful scenery around Freetown, the penetrating studies of human figures, the indigenous masquerade figures, Sierra Leone history, and the underlying unity of the diverse cultures in the country. The book also explores the cultural and social life, and the artistic background of Olayinka’s world in Freetown during her childhood and again after her returned to the city and it examines her relationships to the Freetown’s artistic community. The book also sets her artistic career in the context of the development of modern art in other parts of Africa, showing her career to have been part of a larger artistic movement.

The book contains numerous photographs of Olayinka’s art and is based on archival and published materials, personal interviews, and correspondence in the United States, England and Sierra Leone.

“This incisive and groundbreaking analysis of the art of Olayinka Miranda Burney-Nicol narrates the career of a female pioneer African modernist within the Sierra-Leone context of her birth and the transnational locales of her education and professional practice in England and the United States of America. Olayinka combined elements of her Krio culture with indigenous Sierra Leone culture and modern art to create a distinctive style of art that became a foundation for the development of a new visual language in Sierra Leone. Her story is a narrative of feminist aspirations in the context of modernist engagements and a welcome addition to the growing literature on modern African art”

“Olayinka: a woman’s view—the life of an African Modern Artist is a compelling work on the life and career of one of the pioneers of modern art in Sierra Leone. Through this monograph, Simon Ottenberg has produced a very serious and authoritative account of the life and career of Olayinka Burney-Nicol, one of the most intriguing, multitalented, yet least celebrated and acknowledged artists to emerge from Sierra Leone in the modern era. Olayinka’s Krio background and art are a worthy reflection of her multiethnic, Sierra Leonean identity—truly polyvocal and multisensorial. Ottenberg’s work will definitely fill a huge vacuum in contemporary African art scholarship.”

Assistant Professor of Art History, Rhode Island School of Design and author of Painting for the Gods Art and Aesthetics of Yoruba Religious Murals

SIMON OTTENBERG isEmeritus Professor of Anthropology, University of Washington. He has written seven scholarly books and is the editor or co-editor of four other works. He has curated an exhibition at the Smithsonian Institution on seven Nigerian modern artists and written a book on the masquerades of the Afikpo, a Nigerian people.