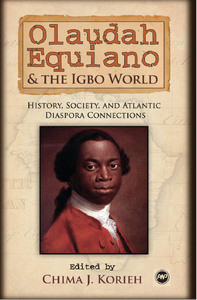 Olaudah Equiano and the Igbo World examines aspects of the history, society and Atlantic Diaspora connection of the Igbo people of the Bight of Biafra hinterland. The large presence of the Igbo in the Americas and the role of enslaved Africans of Igbo origin were important in shaping the larger history of slavery, patterns of enslavement, and new identity formations in the Americas. In this regard, the intellectual contribution of this most famous Igbo son, Olaudah Equiano, to discourses on the history of slavery in the Americas is of great importance. The book addresses several issues including: Igbo history and cultural values as glimpsed from Olaudah Equiano’s narrative, as well as the later Igbo encounter with Western imperialist forces, including the missionary and the colonizing forces, their response to slavery in the New World and aspects of Igbo impact on the Atlantic Diaspora.

The contributors draw from history, literature, philosophy, and anthropology to address the intersection between the Igbo and the outside world and how this encounter shaped the currents of slavery, colonialism and the accompanying social transformations in Igboland and across the African Diaspora. Placing the African background of the Igbo in the context of Atlantic history presents an alternative conceptual approach that teases out the nuances of interconnection between African and the broader Atlantic/global history. The value of this approach is that it recasts our understanding of African continuities in the Atlantic World by situating such experiences in their African backgrounds. This approach sheds light on the interconnections between different parts of the Atlantic world and what specific regions of Africa brought to the complex economic and social formations that began with European exploration of the West African coast in the fifteenth century.

This is a classical exposé of the Igbo entrepreneurial spirit, elegantly packaged in brilliant historical narratives. Equiano represents the indomitable Igbo spirit which under the most despicable circumstances is sometimes bloodied but never bows. This book embodies the most lucid commentaries on Equiano’s odyssey given by his ancestral descendants. It is a must-read for everyone who wants to explore more deeply the historical labyrinth of trans-Atlantic slavery
—Dr. Ifeanyi Ezeonu, Brock University, Canada

ABOUT THE EDITOR
CHIMA J. KORIEH teaches African History at Marquette University, Milwaukee, Wisconsin. He holds a PhD in African History from the University of Toronto, Canada. Prior to joining Marquette, he was Associate Professor of African History at Rowan University in New Jersey. He received the prestigious British Academy Visiting Fellowship at Oxford University, Oxford, UK in 2008. He has authored various articles and essays in journals, books, and encyclopedia. His publications include the following co-edited volumes: The Aftermath of Slavery: Transition and Transformation in Southeastern Nigeria, Missions, States and European Expansion in Africa, and Gendering Global Transformations: Gender, Culture, Race, and Identity. Dr. Korieh is Associate Editor (Africa) of Encyclopedia of Western Imperialism and Colonialism since 1450 and the founding editor of Mbari: The International Journal of Igbo Studies.