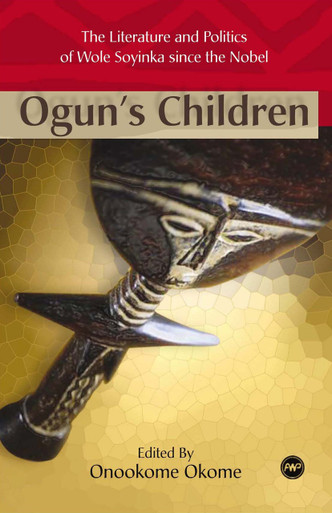 This is a collection of essays on Soyinka’s post-Nobel works executed from the backdrop of his earlier works, especially the so-called “conservative and impossible plays of early Soyinka.” Some of the contributions are concerned with the political tenor and temperament of the post-Nobel years, emphasizing how Soyinka’s literary output during this period accentuates the symbolism of Ogun, the creative energy of Soyinka’s Yoruba cosmology.

This volume of essays is set apart and quite distinct from all previous critical attempts at understanding the literature of the Nigerian Nobel Laureate. It is the first to make concrete the debate that exists between the pre-Nobel and post-Nobel works on the one hand and the exchange both streams of literary output and the Nigerian society at different periods of its recurrent circle of stupidities.

Under the title, Ogun’s Children, the essays celebrate the achievements of Soyinka’s through an acknowledgement of the Ogunian characters, often the vehicles and victims of a wayward political world. The evidence from the post-Nobel era shows a positive and consistent step towards his dictum, “justice is the first condition of humanity”.

The post-Nobel plays- From Zia with Love to Beatification of Area Boys- intensifies Soyinka’s quest for social and political justice in his home country, Nigeria. The subject of the essays is undeniably Soyinka, but the grand narrative is not about Soyinka per se. It is about the Nigerian state. Contributors privilege this grand narrative, while pointing out that post-Nobel Soyinka consciously reframe that decrepit hole in our collective world that we must strive to avoid.

ABOUT THE AUTHOR
ONOOKOME OKOME teaches theatre and cinema Studies at the Department of Theatre Arts, University of Calabar, Nigeria. With Jonathan Haynes, he co-authored Cinema and Social Change in Nigeria (Jos: Nigerian Film Corporation). He edited Before I am Hanged: Ken Saro-Wiwa, Literature, Politics and Dissent, a book of essays on the slain minority rights activist published by African World Press, New Jersey. Dr. Okome is a Fellow of the Alexander von Humboldt Foundation, Germany. He is widely traveled and has given lectures in Israel, Germany, England, Italy, the US and Canada.