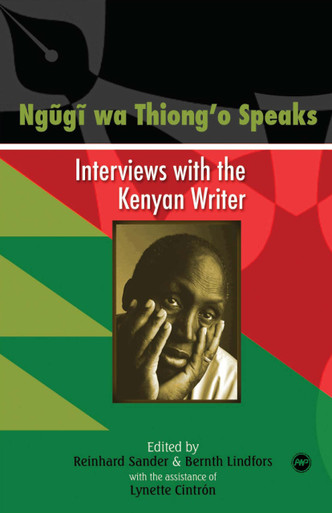 Ngugi wa Thiong'o is one of Africa's most famous writers. His novels, plays, essays and speeches have earned him an international reputation as an articulate spokesman not just for Africa but for the entire Third World as well. His writings, rooted in historical and material realities, have always been politically engaged, arguing a case for the poor and oppressed who, as victims of economic exploitation and cultural domination by the West and by some of their own national leaders, have sought to liberate themselves by resisting the forces that hold them down. He has become a champion of the dispossessed, an inspiring advocate for freedom, justice and human rights for all the downtrodden peoples of the world.

Ngugi wa Thiong'o's evolution as a thinker can be discerned in the conversations collected here. The earliest, recorded forty years ago, reflect his interest in exploring events in Kenya's colonial past that had a profound impact on his own people, the Kikuyu, and ultimately on his own life. More recent discussions focus on present conditions in Kenya and other parts of the Third World.

Cumulatively the interviews reproduced here trace the trajectory of the author's intellectual engagement with his times, showing what he had in mind and how he chose to deal with the challenges confronting him. By eavesdropping on what he says, we can learn a lot not only about what Ngugi was thinking and doing at various stages of his career but also about what was happening in Africa before, during and after independence. Ngugis words lead us to a deeper understanding of colonial and postcolonial history.

ABOUT THE EDITORS
REINHARD SANDER teaches African, African-American, and Caribbean literatures in the Department of English at the University of Puerto Rico, Río Piedras. He is the author of The Trinidad Awakening (1988); the editor of From Trinidad: An Anthology of Early West Indian Writing (1978); and the co-editor of Ousmane Sembène: Dialogues with Critics and Writers (1993), and Twentieth-Century Caribbean and Black African Writers (1992/1993/1995).

BERNTH LINDFORS, Professor Emeritus of English and African Literatures at The University of Texas at Austin and founding editor of the journal Research in African Literatures, has written and edited more than forty books on African literatures, the most recent being The Writer as Activist: South Asian Perspectives on Ngugi wa Thiong'o (co-edited with Bala Kothandaraman, AWP 2001), Africa Talks Back: Interviews with Anglophone African Authors (AWP 2002), and Black African Literature in English, 1997-1999 (2003).

LYNETTE CINTRÓN is an accomplished poet and short fiction writer who does graduate work in the English Department at the University of Puerto Rico, Río Piedras.