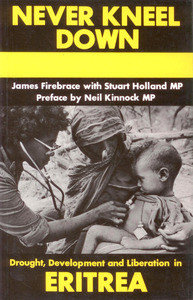 The war in Eritrea is in its twenty fourth year. Hundreds of thousands of people have been killed or disabled or have fled their homes. Over a third of the Enitrean population face starvation as the continuing conflict fuels a major famine. The Enitrean People's Liberation Front is not winning major victories, which may prove to be a turning point of the war. Meanwhile Ethiopia, one of the poorest nations of the world, spends over a third of its budget maintaining and equipping its vast but increasingly demoralized army.

The EPLF is fighting not only for Eritrea's right to self-determination, but also to overcome poverty, famine, oppression and the forces which perpetuate them. A new model for development based on popular participation is being forged. The EPLF has organised redistribution of land and is achieving striking success in reforms concerning the rights, role and status of women in what yesterday was a feudal society. Its programmes of education and health care merit major international recognition.

This book is a result of a fact finding mission to Eritrea made by Stuart Holland, Labour Shadow Minister for Overseas Development and Cooperation, and James Firebrace, War on Want's Programme Officer for the Horn of Africa.