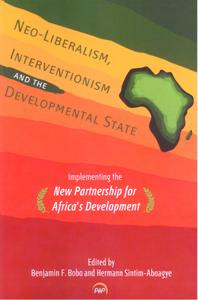 In a single volume, this book uniquely scopes the spectrum of the interplay of politics, history, government, economics and business in the development or perhaps underdevelopment of Africa. With breath, depth and alacrity, Neo-Liberalism, Interventionism and the Developmental State chronicles past development efforts, discusses their successes and failures and worms its way through an array of issues using the most ‘ambitious’ and recent development initiative, the New Partnership for Africa’s Development (NEPAD), as a platform for articulating Africa’s future.

In its quest to shed light on the different paths taken by African countries to realize what has been an increasingly elusive objective of sustained development and to prescribe means to achieve such objective, this book audaciously tackles the subject matter through some thorny and contentious issues. To wit, an attractive analytical landscape emerges throughout the volume underscoring the relevance of neo-liberalism to Africa’s economic wherewithal, arguments on the universal import of good governance and its relevance to economic welfare improvements on the continent, efforts at regional integration among African nations and topics that inspire considerable passion like the roles of multinationals and Bretton Woods institutions in the development or underdevelopment of the African economies.

An all-important crucial and special characteristic of this volume is the emphasis on providing prescriptive measures to resolving Africa’s development problems. It is the plan and hope of the editors that this prescriptive feature of the book lends useful directions to government policymakers and practitioners as well as other interested stakeholders in the implementation of the New Partnership for Africa’s Development. All in all, this book straddles, to the extent possible, the full gambit of problems seen as stumbling blocks to Africa’s development. The book not only makes for interesting reading but also serves as an instructive contribution to the search for a path to a better Africa.

BENJAMIN F. BOBO is a professor of finance at College of Business Administration, Loyola Marymount University where he teaches finance at the undergraduate level and international economic strategy and trade policy in the graduate program. He has held faculty posts at the University of California, Los Angeles and the University of California, Riverside. He has served as Assistant Secretary for Policy Development and Research at the U.S. Department of Housing and Urban Development in Washington, D.C.

HERMANN SINTIM-ABOAGYE is an associate professor in the Department of Economics and Finance, School of Business, Montclair State University. He serves on the Editorial Advisory Board of the Journal of Money, Investment and Banking. He has distinguished himself with pioneering new thought on a broad range of issues relevant to particularly African economic development and has introduced a new analytical framework that extends the boundaries of current economic development models. His work on the connection between inflation and development in the African arena is particularly instructive and serves as a benchmark for scholars not only in the field of development economics but in the broader sphere of political economy as well.