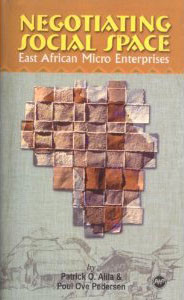 Micro-enterprises have been a theme in development thinking since the 1950s. However, for most of this period, East African governments and administrations have for different reasons been generally skeptical about their role in development. Therefore, legislation, administration and the public have reacted unfavorably toward these types of enterprises.

The micro-enterprise sector is viewed mainly as consisting of small entrepreneurs or informal laborers. There has been no attempt at making a clear distinction between these two categories. Yet, there is actually a significant difference between the micro-entrepreneurs and their laborers which is seldom taken seriously. Many micro-enterprises are run by women, who often have been oppressed in the patriarchal East African societies; these enterprises are also rural and, as a result, are up against monopolistically agricultural trade policies that hinder their access to large parts of the rural market. In principle, many of the former constraints have been lifted by more liberal policies that were introduced during the 1990s. In practice, however, micro-entrepreneurs and their laborers have not obtained new rights overnight. They have to fight and negotiate for a new and enlarged social space. The papers in this book describe these strategies of negotiation and re-negotiation between the micro-entrepreneurs and their laborers, and between the women entrepreneurs, their customers,  suppliers and, of course, their husbands and families. Negotiations between the rural micro-enterprises and participants in the new, more liberalised rural economy are also discussed in this book.

The papers were written by East African and Danish researchers as part of a research collaboration between Institute of Development Studies, University of Nairobi, and Centre for Development Research, Copenhagen.

Poul Ove Pedersen is a Senior Researcher at the Centre for Development Research, Copenhagen, Denmark. He has written widely on the development of small enterprises and small rural towns in Eastern and Southern Africa. He is currently working on a project on the effects of global restructuring of freight transportation and other producer services on Africa.