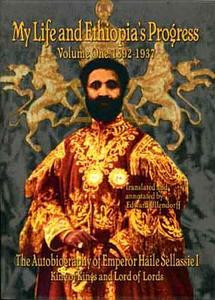 "The autobiography of Haile Sellassie, and vol. I in particular, is of great importance for all those who are interested in Ethiopia and in her history...and obviously for all those who knew the Emperor. They will always remember the man, calm and dignified, who presided over the destiny of his country for more than half a century...Ullendorff, who knew the Emperor for so long and admired him, remains faithful to his memory. In a postscript added in November 1975 he says: "Those of us who really knew the man and the king will long mourn the passing of Haile Sellassie, for there will not arise in Ethiopia anyone quite in his image."
S. Strelcyn in Journal of Semitic Studies, Autumn 1977

"...Haile Sellassie thought it most effective to appeal personally to the League of Nations, and he did so in a speech that was prophetic, hence memorable."
John Markakis in The Journal of Modern African Studies. vol 16/3 Cambridge Univ. Press

"By any standard of judgement the 58-year reign of Ras Tafari as Regent (1916-1030) and as emperor Haile Sellassie (1930-1974), in addition to being one of the longest, was also one of the most momentous in the 3000 year history of Ethiopia..."
Dejazmatch Dr. Zewde Gabra-Sellassie in Bulletin of the School of Oriental & African Studies199/2