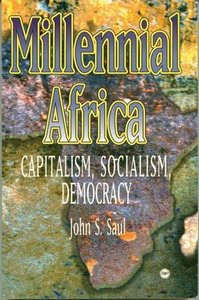 In two previous widely read volumes of essays prepared for Africa World Press (Socialist Ideology and the Struggle for Southern Africa and Recolonization and Resistance: Southern Africa in the 1990s) John S. Saul chronicled developments in Africa, and especially in southern Africa, as the continent neared century's end. Here he returns to issues raised in those volumes and projects his analysis forward into the new century and the new millennium.

Saul moves from the broadest kind of evaluation of the prospects for capitalist development in Africa as a whole to an especially detailed (and markedly sobering) reading of the present situation in post-apartheid, neo-liberal South Africa. In the course of doing so, he painstakingly confronts central questions related to the practice of war and peace and to the prospects for democracy and development throughout the continent—while also emphasizing that the problems of Africa continue to be powerfully shaped by the particular mode of the continents insertion into the wider global capitalist system. Saul's conclusion: that African countries are most unlikely to realize either substantial economic growth or a significant measure of humane development under conditions so defined. In investigating South Africa, for example, he emphasizes the recent reinforcing of social inequalities, shaped both by external and internal compromises, that has produced a particularly bleak denouement to that country's heroic struggle against apartheid. This suggests, in turn, that in South Africa, as elsewhere on the continent, the struggle for socialism -- however difficult such a socialism may be both to define and to practice -- must be part of the solution in contemporary Africa.

And yet, as Saul also argues in these pages, much of contemporary "African Studies" is of limited assistance in advancing along these lines our understanding either of Africa's difficulties or of their possible solutions. By increasingly abandoning the insights of political economy in favor of a more "realistic" political science on the one hand, or of a more eclectic post-modernism on the other, Africanists have too often made their separate peace with the grim process of capitalist globalization. In sharp resistance to this trend, Saul concludes with a ringing defense of the kind of radical and committed approach to an understanding of Africa that the various essays in this book themselves seek to exemplify.

John S. Saul works at York University in Toronto but since the 1960s has also taught, on and off, for almost ten years in Africa, most recently (in the year 2000) at South Africa's University of the Witwatersrand. In addition, he has been a long-time activist in the anti-apartheid movement, principally with the Toronto Committee for the Liberation of Southern Africa (TCLSAC) and with Southern Africa Report magazine. Author or editor of some dozen books and numerous articles on Africa, this is his third volume for Africa World Press.