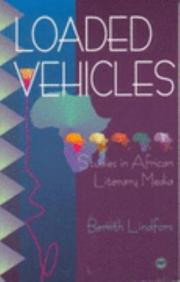 Among the most powerful forces driving contemporary literary movements in anglophone Africa have been the indigenous media that provided aspiring authors with opportunities to express themselves. Ephemeral printed publications-ranging from school and university annuals to literary reviews, popular magazines, pamphlets and newspapers-have helped to stimulate literary creativity by offering regular outlets for short fiction, poetry, drama, essays and reviews. Most young writers got started by producing material for these inexpensive local vehicles that swiftly carried their words directly to their countrymen. The popular media thus encouraged and facilitated the emergence of national literatures addressed to African readers.

The essays gathered here explore aspects of this process by examining the contribution of little magazines to the development of distinctive literary cultures, by calling attention to unusual examples of small-scale publishing, and by scrutinizing stylistic innovations in pamphlets and newspapers aimed at a mass audience. Lindfors also exhumes from Nigerian media of very limited circulation a number of important literary documents that ought to be more widely known.