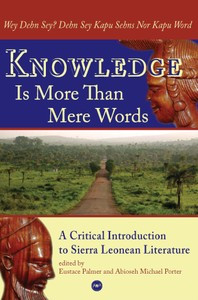 This volume is the first comprehensive analysis and assessment of a national literature that has been growing in recent years. It provides, particularly in the introduction, insightful information about the historical and cultural background to that literature and the traditions on which contemporary writers have built.

The section on poetry contains essays on two of the most challenging and obscure African poets, Lemuel Johnson and Syl Cheney-Coker, discussing many of the poems of these two writers in great detail and shedding light on their meaning, while placing them in the context of Sierra Leones history and development. Then there is a section on drama that showcases the works of Sierra Leones two leading published dramatists, Raymond Sarif Easmon and Yulisa Amadu Maddy, re-establishing the reputation of Easmon who, in the past, had been readily dismissed, and comparing and contrasting the nature of his work with that of Maddy. The very insightful and absorbing essay by Eustace Palmer on vernacular theater in Sierra Leone also brings to the fore one of the most interesting developments in Sierra Leonean literature in recent years, vernacular theater. It is fitting that this section also includes an interview with a leading woman dramatist, the late Toni French.

The section on the novel gives a clear analysis of the artistry of Syl Cheney-Cokers epic work, The Last Harmattan of Alusine Dunbar, and of Sarif Easmons neglected novel The Burnt-out Marriage, showing that the latter is much more committed to the African tradition than commonly supposed. It also includes an analysis of Easmons stories, showing that they are the culmination of his art. This section contains a succinct account of the achievement of Maddy in No Past, No Present, No Future, but, most important, it brings to the attention of the reader new voices in the novel form like Alasan Mansaray and J. Sorie Conteh or older voices that have remained muted like Prince Dowu Palmer and Yema Lucilda Hunter. In particular it shows how these new voices have been grappling with issues that have plagued the Sierra Leonean psyché recently: war and diamonds. Finally, the section deals with folklore and less conventional forms of artistic expression like poetry on the internet, thus rounding up the volume and making it a very comprehensive study.

ABOUT THE EDITORS
EUSTACE PALMER, a native Sierra Leonean, taught for several years at Fourah Bay College, the University of Sierra Leone, where he was Professor of English, Chair of the English Department, Dean of the Faculty (School) of Arts, and Dean of Graduate Studies. One of the pioneer critics of African literature, he has also published two works on the African novelAn Introduction to the African Novel and The Growth of the African Novel as well as scores of articles on that genre. He was Associate Editor, with Professor Eldred Jones, of African Literature Today. He teaches at Georgia College & State University, where he is Professor of English and Coordinator of Africana Studies.

ABIOSEH MICHAEL PORTER is a professor of English and the head of the Department of English and Philosophy at Drexel University. He is also the current editor of the Journal of the African Literature Association (JALA).