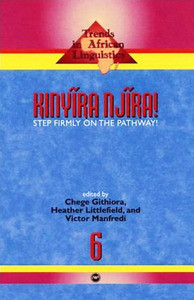 Kiny?ra Nj?ra! Presents 18 peer-reviewed and revised papers from the 31st Annual Conference on African Linguistics, Boston University, March 2-5, 2000. The book’s thematic title—a traditional G?k?y? blessing—echoes the lead essay by Prof. Ng?g? wa Thiong’o, urging African linguistics to move in step with practical development of African languages as part of the decolonization struggle. To that end, the volume includes a state-of-the-art report on the orthography of G?k?y?, reflecting a new alliance of the U?g?, the G?k?y? language committee in Kenya, with linguists from three continents. The core areas of theoretical linguists are also represented in the book: morpho-syntax, phonetics-phonology and semantics-pragmatics.

ABOUT THE EDITORS
CHEGE GITHIORA does descriptive studies of East African languages and cultures. He has published on issues of G?k?y? orthography and Swahili lexicography, and on language, culture and identity in the African Diaspora with a focus on Latin America. He taught at Boston Universtiy (1998-2000) and is currently a lecturer in Swahili at the University of London’s School of Oriental and African Studies (SOAS). He is the author of Diccionario Swahili-Espanol published by El Colegio de Mexico (2002).

HEATHER LITTLEFIELD is a PhD candidate at Boston University and a lecturer at Northeastern University. Her interests focus on Fula syntax, and her current work explores constraints on multiple applicatives. In the future she would like to turn to the area of first language acquisition in West African languages.

VICTOR MANFREDI studies the comparative grammar of the Benue-Kwa languages of the Niger-Congo family, and the indigenous cultures of southern Nigeria. Since 1980 he has taught at more that a dozen universities in Nigeria, Europe and North America.