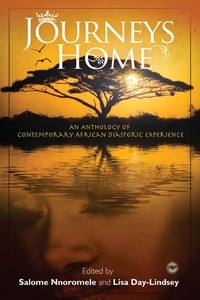 As a major origin of emigrants to the western hemisphere, the African continent has seen its share of both forced and volunteer emigration. During the second immigration phase of the African diaspora, most Africans viewed the West as a place of opportunity, where an education could be obtained to assist in political and economic advancement in their homelands.

However, the sense of optimism that accompanied the new immigrants soon waned as their hope for the eventual voyage home dimmed: deteriorating economic conditions and political instability created by the aftermath of colonization ensured not only permanent exile from their native lands, but also the arrival of millions of others fleeing the same economic hardships, and in many instances, political instability.

This anthology of poems and personal narratives by writers from Ethiopia, Ghana, Liberia, Mali, Sudan, Nigeria, Sierra Leone, Uganda, and Zimbabwe will make readers laugh, cry, smile, and wonder at the life of the immigrant. This collection reflects the blend and clash of cultures, and the pain and triumphs. Residing in various parts of the world, the United States, Netherlands, Wales, Britain, France, and Qatar, these writers give voice to the deep, but often forgotten salient effects of immigration on the African people who have left their family, community, and land of origin. These texts are their journeys home.

SALOME C. NNOROMELE, a native of Nigeria, is the Director of the African/African-American Studies and Professor of English at Eastern Kentucky University. Her teaching and research interests focus on the intersections of race, gender and politics in nineteenth century British literature, African literatures and cultures, and intercultural African immigrant experiences. She is the author of Life Among the Ibo Women of Southeastern Nigeria.

LISA DAY-LINDSEY is an assistant professor of English at Eastern Kentucky University. Her research and teaching interests focus on early and nineteenth-century American literature as well as Caribbean literature.