JOHN HENRIK CLARKE AND THE POWER OF AFRICANA HISTORY: Africalogical Quest for Decolonization and Sovereignty, by Ahati N. Toure 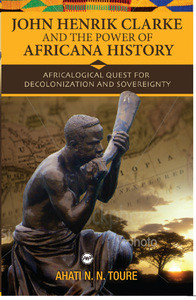 JOHN HENRIK CLARKE AND THE POWER OF AFRICANA HISTORY: Africalogical Quest for Decolonization and Sovereignty, by Ahati N. Toure

In the late 1960s through the late 1980s, the late John Henrik Clarke (1915-1998) was one of the foremost architects of the emerging discipline of Africana Studies/Africalogy as Professor of African World History in the Department of Black and Puerto Rican Studies at Hunter College of the City University of New York and as the Carter G. Woodson Distinguished Visiting Professor of African History at Cornell University’s Africana Studies and Research Center.

The study explores Clarke’s development and conceptualization of Afrikan World History by examining his intellectual influences and training, his approach to teaching Afrikan World History, his notions regarding Afrikan agency and Afrikan humanity, his explorations of themes of Pan Afrikanism and national sovereignty, his ideas concerning the relevance of Afrikan culture in historical perspective, and his legacy in Afrikan intellectualism and culture, including his contribution to the Afrocentric paradigm that is the core of the discipline of Africana Studies/Africalogy.

As an academician and intellectual, Clarke emerged as one of the leading theorists of Afrikan liberation and the uses of Afrikan history as a foundation and grounding for liberation. Under Clarke’s formulation liberation was defined not simply as freedom from European domination, but fundamentally as the restoration of Afrikan sovereignty. He explored history’s utility in moving an oppressed and subordinated people from a position of subjugation on multiple levels to full status as a self-sustaining, self-defining, self-directed, free, and independent people on a global stage.

ABOUT THE AUTHOR
AHATI N. N. TOURE is Assistant Professor of Africana History and Black Studies at Delaware State University. He earned his Ph.D. in American History at the University of Nebraska-Lincoln and an MA in Africana Studies at the State University of New York at Albany. He is the author of several essays exploring subjects in Africalogy and in Africana History, including “John Henrik Clarke and Issues in Afrikan Historiography: Implications of Pan Afrikan Nationalism in Interpreting the Afrikan Experience in the United States” in Pan African Nationalism in the Americas: The Life and Times of John Henrik Clarke published by Africa World Press.