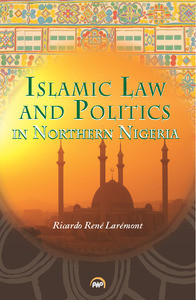 Islamic Law and Politics in Northern Nigeria examines the case of Islamic law in Nigeria through a comparative lens by probing the meaning of justice in Islamic, Jewish, Continental European, and Anglo-American law and by contrasting Nigeria’s experience with sharia with Iran, Saudi Arabia, Indonesia, Malaysia, and Sudan. This historical and political analysis of sharia and its application in Northern Nigeria examines these legal and political issues from a longue durée perspective, thereby acquainting the reader with the essentially uninterrupted application of Islamic law in Northern Nigeria. As this book explains, sharia has meaning for Muslims and Christians alike, whether it is perceived as promising or perilous.

“This book is a unique and valuable contribution that should command the attention not only of the specialists on Nigeria and Islamic law, but scholars of comparative law, political scientists, policy experts, and the general reader as well.”
— Muhammad Sani Umar,
Associate Professor of Islam, Northwestern University

“In this book, Professor Laremont takes the reader through the complex and intricate web of Religion on Nigeria's already fractured political and cultural landscape. He has focused on the Sharia, but in the process, he has also woven a beautiful, readable story told with academic rigor and yet with human passion and candour. It is a book that should be read both by the scholar and anyone who just wants to have an idea about the religious question in Nigeria. The author has rendered an invaluable service to students of Nigeria.
—Msgr. Matthew Hassan Kukah,
Author of Religion, Politics and Power in Northern Nigeria and Vicar General, Catholic Archdiocese of Kaduna

“The author clearly explains how the implementation of Sharia has been affected by diversity. This book has made valuable contributions that should command the attention of specialists on Nigeria and Islamic law, scholars of comparative law, sociologists, political scientists, policy experts and the general readers.”
— Ismaila Zango
Associate Professor, Department of Sociology, Bayero University Kano

“Amid the incredible confusion that surrounds the reintroduction of sharia into the legal systems of twelve northern Nigerian states and the efforts to bring Muslims in other states under its sway, Professor Ricardo René Larémont’s Islamic Law and Politics in Northern Nigeria is a sober, dispassionate account of both the origins of the campaign for sharia in Nigeria and its reception by people and institutions. Particularly valuable are the book’s insights into the heated controversies over the status of women and non-Muslims as well as its careful examination of the varying types of sharia implementation, depending on the nature of the society in question.”
— J. Peter Pham
Professor of Justice Studies, Political Science, and African Studies, James Madison University, Vice President, Association for the Study of the Middle East and Africa (ASMEA), and Editor-in-Chief, The Journal of the Middle East and Africa

“Professor Ricardo Larémont has assumed the herculean task of learning the subtleties and complexities in the current discourse on Sharia among Muslims and beyond. In this engagement he has demonstrated command of the sources, familiarity with the participants in the debates, acknowledgement of the issues of contention and the seesaw manner in which such matters are discussed by both Muslims and non-Muslims.
—Sulayman S. Nyang,
Professor, African Studies Department, Howard University

"..Professor Ricardo Larémont’s informed and penetrating analysis of the complexities of law and politics in Northern Nigeria is testimony to the depth of his scholarship and his natural insight into African realities. This book is a welcome addition and a must read for understanding contemporary Africa".
— Abubaker al Shingieti, PhD
International Institute of Islamic Thought (IIIT) Herndon, Virginia

ABOUT THE AUTHOR
Ricardo René Larémont is Professor of Political Science and Sociology at SUNY Binghamton and Carnegie Corporation Scholar on Islam. His research interests include political Islam, ethnic conflict, religious conflict, conflict resolution, democratization, and civil/military relations, particularly in North Africa and the Sahel. His previous publications include: Islam and the Politics of Resistance in Algeria, 1783-1992: The Causes of War and the Consequences of Peacekeeping in Africa; and, Borders, Nationalism, and the African State.