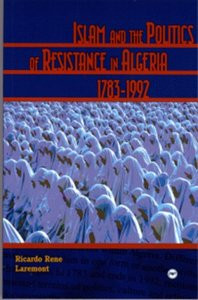 "Islam and Politics of Resistance in Algeria is a stimulating examinatio nof the crucial land decisive role that Islam has played in Algeria's past and its current political struggles. This study is a penetrating analysis of Islam's impact on Algerian political culture. It should be read by anyone seriously interested in politics and Islam in the contemporary world."
-Ali A. Mazrui, Albert Schweitzer Professor
in the Humanities, SUNY-Binghamton University

Ricardo Rene Laremont is the associate director of the Institute of Global Cultural Studies at SUNY-Binghamton and is appointed to the faculty of Political Science. He received his J.D. from New York University and his Ph.D. from Yale University. His articles have appeared in journals including the Oxford Journal of Islamix Studies, Souls and African Studies Quarterly. He has lectured in Morocco, Mauritania, Senegal, Singapore, France and Great Britain.