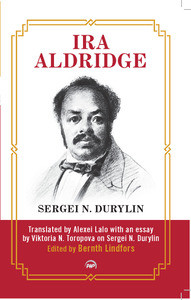 Sergei N. Durylin, a remarkable Russian scholar, published the first biography of the famous black American actor Ira Aldridge in 1940, concentrating mainly on his Shakespearean performances in Russia from 1858 to 1866. Durylin combed through many old newspapers and actors’ memoirs searching for eyewitness reports on what Aldridge did on stage and how audiences responded to him. The result was a vivid account of the profound impact Aldridge made on Russian theatergoers who had never before seen a black actor, much less one capable of performing brilliantly not only as Othello but also as Shylock, Macbeth, King Lear, and Richard III. Aldridge added a farcical role to the mix, playing Mungo, the comical black servant in Isaac Bickerstaff’s The Padlock. With nearly four decades of experience on stage in Europe behind him, Aldridge was at the height of his powers on his initial visit to Russia, and the responses to him then and afterwards provide ample evidence of how well he was able to interpret the classic roles he performed.

This is the first full translation of Durylin’s path-breaking biography to appear in English. Included in addition is an interesting biographical essay on Durylin by Viktoria N. Toropova.

ABOUT THE AUTHOR, TRANSLATOR, AND EDITOR

BERNTH LINDFORS, Professor Emeritus of English and African Literatures at the University of Texas at Austin, is currently writing a multi-volume biography of Ira Aldridge.

ALEXEI LALO, who prepared the translation, is a postdoctoral research administrator at the Melikian Center for Russian, Eurasian and East European Studies, Arizona State University. A native of Belarus, he holds a Ph.D. in Comparative Literature from the University of Texas at Austin.

VIKTORIA N. TOROPOVA, a philologist and prize-winning authority on the life of Sergei N. Durylin, resides in Moscow.