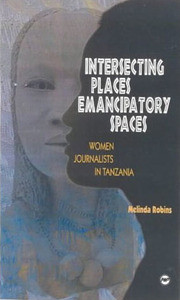 Introducing us to urban, professional women in Africa, a group which is often overlooked, this book has several elements which make it interesting to a wide range of readers, including Africanists, media scholars, feminists, and researchers interested in discovering ways to present their findings. It specifically looks at the situation of those women who have taken advantage of recent opportunities to become journalists in the growing market economy, privatization of the press, and introduction of commercial broadcasting in Tanzania that have taken place only during the past few years.

This book takes a critical feminist approach in an effort to recognize the complex and interdependent relationships among the economic and political systems, the media industries, and those who produce its content. Interestingly, in presenting research findings in two forms of drama, Robins energizes the dialogue on how scholars might write in fresh and innovative ways that engage both researchers and readers of research in lively, ongoing praxis. The first drama, which comes after chapters detailing the situation in Tanzania generally and for women specifically, male and female journalists speak candidly about their experiences. The second drama takes us home with the researcher as she struggles with the ethnographic tradition and realities of her day-to-day experiences.

Melinda Robins is an Assistant Professor of Journalism at Emerson College in Boston, Massachusetts.