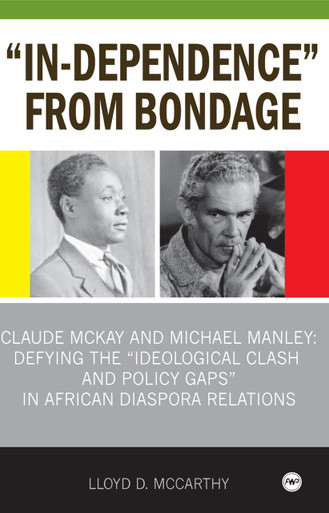 This fascinating and lively book by Lloyd McCarthy compares and brings into light the relevant worldviews of the famous Afro-Caribbean poet and novelist, Claude McKay and the world renown socialist prime minister from the Caribbean Island of Jamaica, Michael N. Manley. McCarthy shows through interpretations of not widely known works of McKay and documented works of Manley that although they came from different time periods, professional backgrounds and intellectual traditions, they arrived at a common awareness that the dominant political ideology of the North is incongruous to the history and development of people in the African Diaspora and in the global South in general.

McKay and Manley defy the hegemonic and economic agenda of the North through their legacy of art, politics, statesmanship and the documented experiences of their demonstrated struggle for their worldviews. McKay and Manley's worldviews clash with those of the North's elite, who desire to maintain their prosperity and that of the world's small propertied class at the expense of the world's property-less peoples, the African Diaspora and the South.

Authentic and Bold as Reggae Music

“I find the work to be as authentic and bold as our reggae music and a factual appreciation of the effective rearguard leadership role of women in forging history. It is a stirring reminder that as women, we can influence the progress of our society and indeed the world without fanfare…. The work is stimulating—a very nice, interesting, juxtapositioning of two great Jamaicans who hitherto seemed worlds apart.”

Poet and Politician Talk the Talk… A Liberation Blueprint

"As black people around the world continue to search for "liberation blueprints" perhaps the work of Lloyd McCarthy might prove to be a guidebook. By looking at the intellectual development of Claude McKay and Michael Manley he mines the Afro-Jamaican traditions for its gold. Here is work that restores the importance of looking to the common man for leadership and moral direction. Poets and politicians can meet on the same road and at times, talk the talk. New World Africans need to listen."

ABOUT THE AUTHOR
LLOYD MCCARTHY was born in Mandeville, Jamaica. He is a former Jamaican public servant, having held the titles of Director of Land Policy in the Office of the Prime Minister and Senior Director of Land Administration in the Ministry of Housing and Environment. While serving in this public capacity, Lloyd’s personal and professional orientation was towards instituting policies and programs to empower low-income and dispossessed communities. Lloyd currently resides in Raleigh, NC with his wife and two sons and manages his planning-based consulting firm—McCarthy Consulting Group.