IFA: The Yoruba God of Divination in Nigeria and the United States, by Louis Djisovi Ikukomi Eason, With Reflections and Commentaries Edited by Toyin Falola 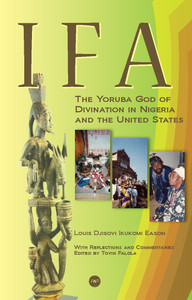 IFA: The Yoruba God of Divination in Nigeria and the United States, by Louis Djisovi Ikukomi Eason, With Reflections and Commentaries Edited by Toyin Falola

In this book, the late Dr. Louis Djisovi Ikukomi Eason offers a combination of personal, historical and solicitous accounts on Ifa, the Yoruba divination deity. Using sites in Nigeria and the United States, he reveals various aspects of the religious practices and festivals that are associated with this important deity. As he narrates his first-hand observations and insertions into the inner sanctuaries of divination, he offers remarkable insights on ancient elements of Ifá worship and practices in Ilé Ifè and their contemporary rebirth among African Americans who successfully turned the Oyotunji Village into a powerful religious space.

ABOUT THE AUTHOR
LOUIS DJISOVI IKUKOMI EASON, Ph.D. (1949-2005) was born and reared in Atlanta, GA. A community activist, he assisted in physically locating Oyotunji African Village at its present site in Sheldon, South Carolina in 1971. He was initiated into the Yoruba-Fon Traditional Religion as a priest of Shango/Ajakata in 1978, and in 1992, he received both hands of Ifa in Ile-Ife, Nigeria and later was enstooled as a chief. Director of a cultural program and an instructor and co-founder of the Africana Studies Program at Bowling Green State University (1997-2005), he also was an African percussionist in the Babatunde Olatunji genre and the author of several scholarly articles on African Traditional Religions.