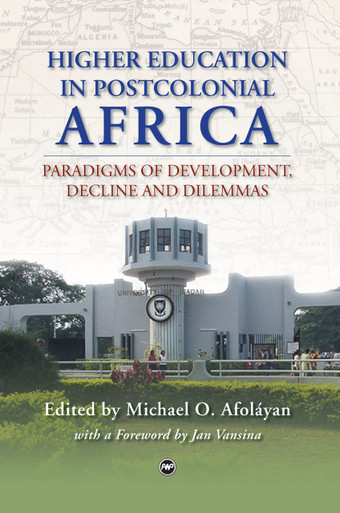 Few regions of the world can boast of having the same level of potential and natural endowments as Africa. Yet, it is a tragic irony that the continent is incontestably the most unsuccessful in providing the human and capital resources to sustain itself. It is thus a reasonable intellectual quest to query the intrinsic and foreign factors that account for the illusiveness of success in this realm. It seems, then, that the most logical social institution to turn to at such a time as this is education, most especially higher education. This book, Higher Education in Postcolonial Africa: Paradigms of Development, Decline and Dilemmas is thus a response to such an enigmatic paradox. It is an assemblage of scholarly discourses on inexhaustible critical issues affecting the lack of adequate productivity of higher education in Africa. Some of the external problems isolated include the vicious cycle of Africa’s economic instability, inadequate political leadership, disruptive military interventions, and several other social conditions engendered by several generations of a lingering pathetic colonial history.

With eclectic perspectives of 17 top scholars, drawn from a team of educators, historians, scientists, anthropologists, legal scholars, retired and contemporary university administrators, and diplomats, this book provides a variety of short-term and long-term solutions, and also points out challenges that defy the rules of conventional wisdom. What we have here is a rich intellectual dialectic and an exchange of dialogues that flow into an array of constructive criticism of the state of affairs of higher education in postcolonial African states. While suggesting panaceas where possible, the book raises questions on the role of universities not only for their inability to respond to, but in perpetuating, the growing pain of brain drain, inadequate research, intellectual anachronism, mismanagement of funds, vanishing trend of the culture of civility and discipline, heightened rate of low campus morale, creepy dependency on foreign organizations, and an overall increasing rate of decline in the quality of knowledge production. This book is a good read for any scholar with a close-range interest in the development and relevance of higher education in postcolonial Africa.

“This book… discusses higher education as it is today with its achievements and its host of problems. Far from being content with a superficial description of the current state of affairs the contributors…. offer insights as to how institutions of higher education should be restructured to become truly efficient and fully adapted to both the current social and cultural climate and to sustainable budgets. Every paper makes it clear that while there are no ready-made solutions the goals remain the same—to make the institutions financially sustainable, able to offer a solid general and technical training, to limit the brain drain, and to remain or once again become accessible to highly gifted students whatever their income and their social status. Beyond this though, the reader will soon discover that this important book is also a stimulating work and one that continually challenges their ingenuity to find workable solutions.”

About the Author:
MICHAEL O. AFOLAYAN, Ph.D., holds degrees from Obafemi Awolowo University, Yale University, and the University of Wisconsin-Madison in the fields of education, linguistics and African/African American studies. Currently an assistant professor in Curriculum and Instruction at Southern Illinois University Edwardsville, Afoláyan has contributed several chapters to academic journals and a variety of books in the fields of education, African studies, and sociolinguistics. His co-edited book, Current Discourse on Education in Postcolonial Nations is currently due for release by Nova Science Publishers.