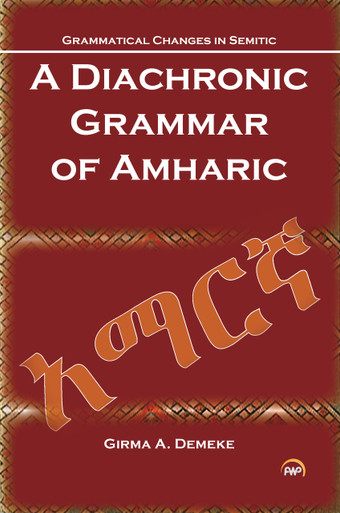 Non-Semitic features are visible in every aspect of the grammar and lexicon of Ethio-Semitic languages (ES). Some scholars attribute this to pidginazation, a hypothesis which posits that ES originated from a Cushitic substratum and a Semitic suprastratum. The latter is assumed to have been brought by a Semitic group (or a wave of groups) who migrated from South Arabia into Ethiopia around 500 BCE. However, since the Ethio-Semitic group contains the most diversified languages of the Semitic family and has preserved core Semitic features, a counter-proposal which considers ES to be an autochthonous group has become standard these days. The short period of Amharic history does not prove the hypothesis that ES originated from a mixture of Semitic and Cushitic. Most of the non-Semitic features that contemporary Amharic exhibits are recent innovations.

Current Amharic lacks pharyngeal sounds as do the other South Ethio-Semitic languages with the exception of Shonke-Tollaha Argobba. The glottal sounds have also limited distribution in modern Amharic (MA). Old Amharic (OA) has these typical Semitic sounds. Current Amharic seems to be developing postpositions and is characterized by circumpositions. In OA the postpositional elements as relational items did not exist. Neither did circumpositions exist. OA is characterized by a mixed word order. A transitive clause in MA has unmarked SOV order. Relative clauses and adjectives must also follow their head noun. OA was not rigid in this regard. Although structures like those in modern Amharic are attested, we find a VSO order in OA. Relative clauses and adjectives may also follow the noun that they modify.

Because Amharic has been serving as a language of administration for over a millennium, it has developed unique polite forms for second and third persons. These polite forms underwent a number of fascinating changes throughout history. Except for third person, Amharic has preserved the Semitic personal pronouns. This book describes the historical grammar of Amharic which furthers our understanding of the changes that Ethio-Semitic languages underwent. The research is based on ancient manuscripts and grammatical works of different periods.

ABOUT THE AUTHOR
GIRMA A. DEMEKE works mostly on the history and syntax of Ethio-Semitic languages. He has been engaged also in language development projects and in the documentation and revitalization of endangered languages. He is the author of the Origin of Amharic and other books and articles. Dr. Demeke is currently working as a Senior Editor at Africa World Press and the Red Sea Press, Princeton, New Jersey.