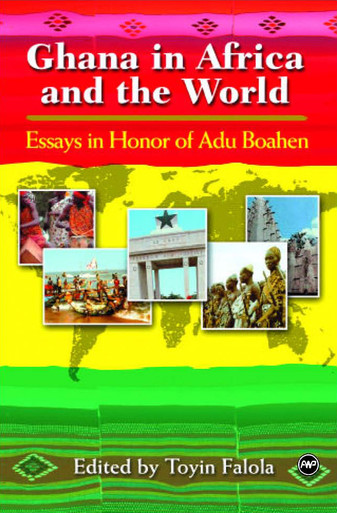 Adu Boahen, the dean of Ghana's history and letters, has been a leading figure in the writing of African history since the 1950s. His loud insistence that African history should be written from an African perspective has borne considerable fruits. He pioneered the production of successful textbooks on West Africa and monographs on colonial rule in Africa. His leadership in the training of many scholars in the postcolonial era is also one of his touchstones.

A public intellectual who has shaped West African history in dramatic and enduring ways, Adu Boahen became famous for his struggles against military regimes and for the establishment of democratic institutions in Africa. He was so committed to the inauguration of a new political system that he ran for the presidency of his country in 1992. Despite his loss in the election and his failing health, Boahen continues to participate actively in the politics of Ghana and the production of new knowledge relevant to Africas future.

The essays in this volume reveal the wide range of Adu Boahen's scholarship, namely, a commitment to studying precolonial history, indigenous belief systems, inter-group relations, colonialism, and the challenges facing postcolonial Africa. In this collection, Ghana becomes the window to peer into Africanist scholarship and the world thus envisioned. The contributors are drawn from the students, peers, colleagues and successors of Adu Boahen; as they celebrate his scholarship, they lead us into the New Africa for which Boahen and the pioneers tirelessly worked.

"Some people make history and do not write it themselves. Others write history and do not make it. Adu Boahen has been privileged to record the annals of past ages and actively contribute to the history of his own times. He has been a fighter for Africa's independence, a prisoner of conscience under a military dictatorship, a leader of a political party in a democracy and a brilliant interpreter of Africa's past."

"Boahen is not only a fine scholar and courageous politician but also great fun."

ABOUT THE EDITOR
TOYIN FALOLA is the Frances Higginbothom Nalle Centennial Professor of History at the University of Texas at Austin. He is also the recipient of the Jean Holloway Award for Teaching Excellence and the Khaldun Distinguished Award for Research Excellence. He is editor of a five-volume series on Africa and the author of Key Events in African History and The Culture and Customs of Ghana.