FROM ABRAHAM TO OBAMA: A History of Jews, Africans and African Americans, by Harold Brackman and Ephraim Isaac 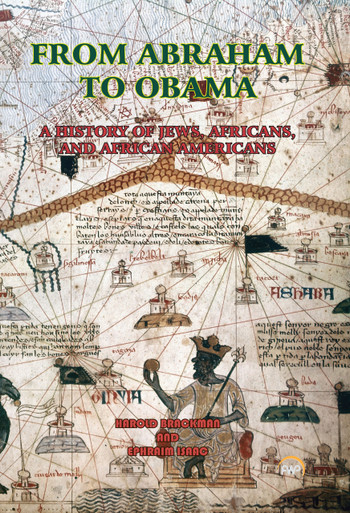 FROM ABRAHAM TO OBAMA: A History of Jews, Africans and African Americans, by Harold Brackman and Ephraim Isaac

This book is a long awaited work on discovering and re-discovering the long standing relations, at times warm and supportive, and at other times, conflicted and troubled linkages between Jews and African Americans in the context of American history.

However, these two prominent writers go beyond the long and troubled history of Jews and African Americans in the United States, by exploring the historical origins of these two peoples by stretching their narrative to Africa and Israel and the politics therein.

Brackman and Isaac are nothing but honest about their strong feelings and closely examine the historical data of these relationship in searching for an understanding of the tortured paths that it may have taken.

"Harold Brackman and Ephraim Isaac, two seasoned scholars, have written a magisterial account of the relationship between Jews, Africans, and African Americans, the three most persecuted groups in human history." -David Brion Davis (From the Forward)

"I am convinced that, in the twenty-first century, we have reached a turning point where the Black-Jewish civil rights coalition needs to be rebuilt in a global context where relations between Israel and Africa have taken their place beside relations between Jews and African Americans in the United States.

…I view myself fortunate to have in some sense shared the intersecting experiences of African, African American, and Jew. A Jew, born in Africa, I know not only what African Americans have endured in the United States, but what my fellow Ethiopian Jews have experienced in Israel. In the ancient and medieval worlds, there were encounters of Jews and Africans long before the first persecuted European Jews and enslaved Africans arrived in the New World.

This book traces the many and multifaceted encounters of Jews, Africans, African Americans over centuries and continents. We hope it will contribute to a rebirth of empathy and mutual understanding." -Ephraim Isaac (From the Preface)

"…It demonstrates how important the relationships between Jews, Africans, and African Americans have been over centuries and across continents. It also shows what a singular achievement the Black-Jewish civil rights alliance in the United States has been, and how it can even inspire efforts toward inclusiveness in contemporary Israel -Rabbi Abraham Cooper, Simon Wiesenthal Center & Museum of Tolerance (From the Afterward)