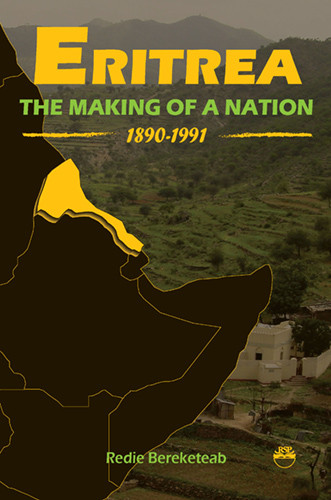 This book examines the century-long process of the making of the Eritrean nation. Developments that culminated in the emergence of the State of Eritrea in 1991 are investigated and elaborated as they are traced from their beginnings in 1890, when Italy declared the creation of its new Colony of Eritrea. The study argues that the act of territorial delineation initiated the creation of Eritrea, followed by various phases of transformation that shaped its formation. This century-long process is divided into three distinct periods, Italian rule, the British administration and Ethiopian rule.

This book contends that the making of Eritrea was fundamentally the result of the actions of two groups of collective actorsthe colonial powers and the nationalist movements. It examines this interplay, beginning with the impact of Italian colonialism on the socio-economic structure of Eritrean society. The nationalist political movement fostered the development of Eritrean national consciousness. The impact of Ethiopian involvement in Eritrea was significant in that the resistance it sparked in Eritreans led to the creation of an Eritrean identity. The National Liberation Movement, in its fight against Ethiopian occupation, and in its intention of bringing social change contributed decisively to the formation of the Eritrean nation. Based on the existing paradigm of theories of nation formation, six analytical dimensions are selected. These are territorial integration, socio-economic integration, politico-legal integration, common history, common culture and the will to live together. A sociological interpretation of the process of formation of the Eritrean nation is elaborated through a chronological examination of developments in Eritrea.

The central points of the thesis are briefly summarized as follows. Pre-colonial societies with no common history, culture or state-like organization were integrated by the Italians into what came to be known as the Colony of Eritrea. Territorial integration was achieved under Italian rule, while the process of socio-economic and politico-legal integration continued during the British administration and Ethiopian domination. Out of this integration by force and the Eritreans struggle against colonial rule, a commonly experienced history and shared culture emerged, and the people of Eritrea began to develop a will to live together. A duality of identity also characterizes the Eritrean path to nation formation in the form of both sub-national (ethno-linguistic) identity and national (civic, supra-ethnic) identity. Finally, the State of Eritrea emerged from the struggles between the Ethiopian rulers and the NLM, which shaped and reshaped the web of relationships between the mentioned six emergent dimensions of nation characterizing Eritrea.

ABOUT THE AUTHOR
REDIE BEREKETEAB received his PhD in Sociology from Uppsala University in 2000. He has written several articles and book chapters among which are: Perilous Dualism: Language, Religion and Identity in Poly-Ethnic Eritrea (2004), and "Building Culture of Peace in the Horn of Africa (2005)," SIRC, Lund, Sweden.