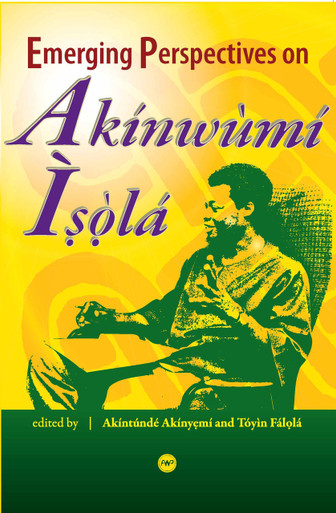 This book provides debates and representations of society to be found in the works of Akínwùmi Ìsòlá, one of the leading contemporary writers in African-language. His numerous creative works have received national and international attention, and many of them have been translated into other languages and adapted as scripts and texts for plays and films. His imagination, vision, and craft distinguish him as a creative writer of the very first rank and one of the few literary scholars that Nigeria has produced. This book presents a systematic account of the writers life history and a detailed analysis of his style of writing, use of language, and ideological positions.

In nearly four decades of an immensely creative career, Akinwumi Isola has emerged as the outstanding Yoruba writer of our age, a worthy successor to D.O. Fagunwa, whose mantle he has assumed with remarkable grace. This book provides not only an extensive scholarly exploration of Isola's work in all its range, but, more importantly, full testimony to the qualities of imaginative conception and expressive style to which he owes his present eminence.
F. ABIOLA IRELE,
HARVARD UNIVERSITY

Beyond myth-making, there came Beowulf, Chaucer and Shakespeare for the English language; Johann Wolfgang von Goethe for German, Alexander Pushkin for Russian; then came Akinwumi Isola to put his stamp of authority on the creative genius of the Yoruba language for poetic expression in the Aristotelian sense of "poetics."
OLASOPE O. OYELARAN,
PROFESSOR OF YORUBA LANGUAGE

ABOUT THE EDITORS
AKINTUNDE AKINYEMI is an Associate Professor in the Department of African and Asian Languages and Literatures, University of Florida in Gainesville. His book on the oral historical tradition of the famous city of Oyo, Yoruba Royal Poetry: A Socio-Historical Exposition and Annotated Translation, was published in 2004.

TOYIN FALOLA is an internationally recognized leading scholar in the history of Africa. Falola has been presented with three Festschriften, various citations, and honorary doctorate. He is the 2006 recipient of the Felix E. Udogu Africa Award, the 2006 Cheikh Anta Diop Award, the 2007 Amistad Award, and the 2007 SIRAS Award for Outstanding Contribution to African Studies. His award-winning memoir, A Mouth Sweeter Than Salt, captures his childhood years.