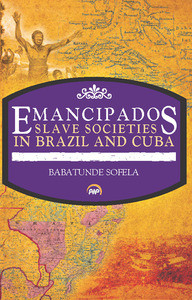 This book provides definitive information on the identity and status of the emancipados who were a special group of Africans in Brazil and Cuba in particular and Latin America in general. The author establishes the fact that the peculiar nature of the introduction of the emancipados into Brazil and America made them free Africans both de jure and de facto thereby setting them distinctly apart from freed Africans or slaves in the Brazilian and Cuban slave societies in comparison to whom the emancipados enjoyed a clearly more favorable status within the slave societies.

Furthermore, Emancipados Slave Societies in Brazil and Cuba offers a penetrating insight into the African roots of the emancipados as it traces not only the geographical link of these Africans but their ethnic roots as well. The book therefore is a primary source for the emergent efforts by Africans in the Diaspora to find their roots and it is a ready tool for the new identity social engineering called Genealogy and Family DNA Research that is rapidly gaining momentum in the U.S.A in particular and the Americas in general.

The book also gives historical support to the contention that thorny problems such as the emancipados generated in nineteenth century anglo-Latin America diplomatic history can be solved by benevolent foreign intervention as long as the foreign state accord the local state due honour and respect.

Finally, being a pioneer work in the comparative analysis of the emancipados in Brazil and Cuba, it opens up very useful understanding of the Luzo-Hispanic content of Latin American history and Society.