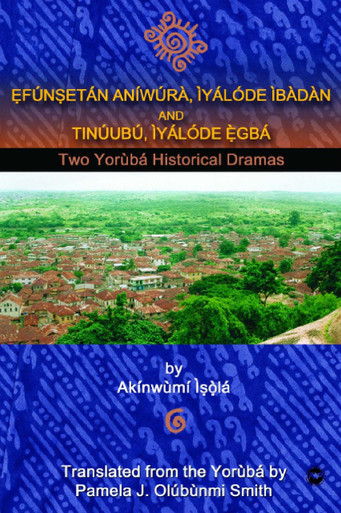 Pamela J. Olúbùnmi Smiths Efúnsetán Aníwúrà, Ìyálóde Ibadan and Olú Æmæ (Tinuúbu), Ìyálóde Ëgbá, is an annotated English translation of Akínwùmí Ìsölás trailblazing dramas of two powerful, nineteenth century Ìyálóde during the seventy-year protracted internecine Yorùbá wars. Besides important male historical figures, change agents included a number of very distinguished women who have been written out of history, but whose trajectory, undoubtedly, did not stop with the nineteenth century. Thus, in capturing the stories of Ìyálóde Efúnsetán and Tinuúbu, Ìsölá speaks on behalf of the collective who make up the vast list of distinguished women in African history whose life stories and contributions to the economic, social, and political development of their respective societies are waiting to be told for posterity and for scholarship. More than a work of literature, Eúnsetán Aníwúrà, Ìyálóde Ìbàdàn & Olú Æmæ (Tinuúbu), Ìyálóde Ëgbá, affords the modern reader a primer of Yoruba culture.

Pamela J. Olúbùnmi Smith's translation brings to the English language audience a sumptuous cultural and intellectual package that can only enlarge our historical understanding of the lives of women in precolonial African societies. This translation brings to vivid life Ìsòlà's sense of Yorùbá speech, spectacle, and their relationship to power.

ABOUT THE TRANSLATOR
PAMELA J. OLÚBÙNMI SMITH is a professor of English, humanities and womens studies at the University of Nebraska at Omaha. Dr. Smith holds a doctorate in comparative literature from the University of Washington and has published several essays on translation issues and Yorùbá language and literature. Dr. Smith has won several awards for research and teaching. She is the Co-Editor of Tongue and Mother Tongue (Africa World Press, 2002).