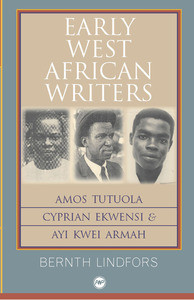 This book focuses on the first works produced by three talented West Africans who felt an urge to express themselves in print. These creative individuals were pioneers in a literary movement that gathered force and swept across Africa with remarkable speed in the latter half of the twentieth century, producing distinctive national literatures in new nation states that were in the process of freeing themselves from the legacy of colonial rule. Writers such as these helped to shape and reinforce that movement toward self-definition by creating works that were indisputably African.

How did such writers emerge? What led them to write? Which influences and life experiences proved to be most decisive in their formation? Why did they choose to express themselves in the ways that they did?

This book attempts to answer such questions by examining in detail each author’s earliest compositions and by charting the direction of his later development. What is most striking when viewing these three writers side by side is how remarkably different they are from one another. They reflect the cultural diversity one finds today in Africa, where contesting forces of tradition and modernity have transformed the lives of individuals in a variety of interesting ways. Amos Tutuola, Cyprian Ekwensi and Ayi Kwei Armah are products of this changing social environment, and each has responded in a creative manner to the peculiar pressures, challenges, and opportunities in such a world. By following their own instincts and proclivities as writers, they have enlarged and collectively enriched the verbal culture of contemporary Africa.

“No scholar has done more than Bernth Lindfors to uncover the initial developments that led to the growth of that astounding flowering of writing in West Africa in the 1960s and 70s. Now he follows his indispensable collections of essays, Early Achebe and Early Soyinka, with this new collection on the early writings and publication history of Amos Tutuola, Cyprian Ekwensi, and Ayi Kwei Armah—writers, as Lindfors says, 'as different as night, dawn, and day.' Lindfors combines detailed and meticulous scholarship with an engagingly readable style. These essays with revelations of previously unknown early writing and documents are essential reading for anyone seeking to understand the complex influences and events which shaped these three major writers and brought them to the attention of publishers and readers in Africa, England and America.”
— C.L.Innes
Emeritus Professor of Postcolonial Literatures, University of Kent, Canterbury

ABOUT THE AUTHOR
Bernth Lindfors, Professor Emeritus of English and African Literatures at The University of Texas at Austin, is the author and editor of numerous books on African literatures, the latest being Early Soyinka (AWP, 2008) and Early Achebe (AWP, 2009).