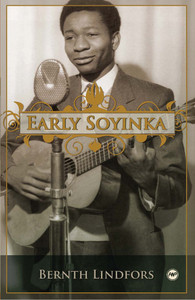 This book contains half a dozen essays on writings by Wole Soyinka composed prior to publication of his first books in 1963. These early works reveal his precocious talent as a writer of stories, dramas, essays, letters, humorous sketches and jokes, the argument being that they cannot be dismissed as juvenilia or immature scribblings for they already exhibit an impressive command of language as well as dexterous handling of techniques of characterization and plot construction. Later essays deal with formal aspects of the plays he published between 1963 and 1973 and his subsequent experience as a theater director at home and abroad. The book concludes with an examination of the mixed Nigerian response to his Nobel Prize for Literature.

In this collection of witty and perceptive essays, Lindfors brings to the fore neglected dimensions of Soyinkas genius. At once trenchantly critical and eminently readable, the essays show Lindfors drawing on his expertise in several fields, grappling with the obscure, and relishing the accessible. His inclusion of numerous quotations from the Nigerian writer enables readers to share his sense of discovery and assess the justness of his observations.
James Gibbs, Professor Emeritus, University of the West of England

Wole Soyinka is not one to tolerate hagiographers and Bernth Lindfors is not of that kind! All the better: Wole Soyinka is well served by Bernth Lindfors impeccable erudition, willingness to go into remote archives, open minded democratic spirit! Bernth Lindfors is the true literary scholar always curious, always eager to make the reader understand and appreciate! How lucky Wole Soyinka is to have had such a brilliant figure attached to him, from early times! He really got who he deserved!
Alain Ricard, Research Professor, Center for the Study of Black Africa, University of Bordeaux. Author of Languages and Literatures of Africa

When a writer such as Soyinka achieves the eminence and worldwide recognition he has, even the earliest of his writings is worth recovery. Lindfors shows how the characteristics of Soyinkas distinctive voice as a writer can be discerned even in his earliest work. This collection allows us to see how Soyinka developed from his earliest works to his mature plays and novels, and what forces shaped him on his long and often controversial journey. No reader of Soyinka can afford to ignore this work or should fail to benefit from it.
Gareth Griffiths, Professor of English, University of Western Australia, Perth, Australia

From the witty undergraduate Madame Etiennes Establishment to the underrated Kongis Harvest and beyond, Bernth Lindfors offers a detailed, provocative, sometimes controversial, but always illuminating commentary on Soyinkas earlier work. This is a stimulating and admiring engagement with one of our great contemporary playwrights; a labour of love, which may well not be entirely reciprocated by its subject!.
Martin Banham, Emeritus Professor of Drama & Theatre Studies, The University of Leeds

ABOUT THE AUTHOR
Bernth Lindfors, Professor Emeritus of English and African Literatures at The University of Texas at Austin, is the author and editor of numerous books on African literatures, the latest being Ngugi wa Thiongo Speaks: Interviews with the Kenyan Writer (AWP, 2006), co-edited with Reinhard Sander and Lynette Cintrón.