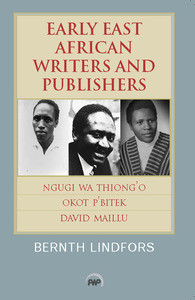 “Historical documentation becomes art when it is bold enough to transcend the linearity of time and place by an interacting subject. Bernth Lindfors is such a troubling and participating voice and narrator. His multithematic book Early East African Writers and Publishers combines the abundance of detailed information on the emergence of individual writers such as Ngugi wa Thiong'o, David Maillu, and Okot p'Bitek, the theoretical valuation of East African multilingual literary production coming out of the oral and the popular, and the transitive and interdependent relations of the writer, the translator, the publisher and the readership. Lindfors' writing of East Africa of 1950-1980 is a personal and critical account of great relevance, down to the charms of his style and the inquisitiveness of his engagement.”

“A worker in the field of East African literature, Bernth Lindfors tracked down writers ignored by scholars, dug things out and found out what was growing, how and why.  What did their writing mean to them? How did it get out? Why should it mean anything to us?  He quotes and analyzes significant extracts to explain the work of popular writers such as David Maillu as well as of unofficial poet laureates such as Okot p’Bitek, presenting findings in a persuasive style, sprinkled with practical issues, punning and alliteration."

“Bernth Lindfors has long been recognized as one of the pioneers of African literary history and criticism and as the essays in this collection exemplify, he is also the chief archivist of African literary culture. These essays provide readers with an important vista into East African literature at its moment of inception in the 1960s and its flowering in the 1970s. Through rare interviews with the major writers of the region and their publishers, Professor Lindfors provides rare accounts into the process by which East Africa, once considered to be the literary desert of the African continent, became central to the creation of the most unique multilingual literature of the modern period.”
—Simon Gikandi,

“In these essays and interviews Bernth Lindfors focuses on some of the unique characteristics of early East African literature, noting how education, politics, traditional and modern culture, and local publishing opportunities have shaped the poetry, prose and criticism produced in this distinctive multilingual region. Ngugi wa Thiong'o, Okot p'Bitek, David Maillu, Aubrey Kalitera, Henry Chakava, Julius Nyerere, Muhammed Said Abdulla, and Faraji H.H. Katalambula are among the many authors and publishers discussed. This book will be of immense interest and value to readers of African literature all over the world.”

Professor of Literature, University of Nairobi

BERNTH LINDFORS, Professor Emeritus of English and African Literatures at The University of Texas at Austin, is the author and editor of numerous books on African literatures, the latest being Early Soyinka (AWP, 2008) Early Achebe (AWP, 2009) and Early West African Writers (AWP, 2010).