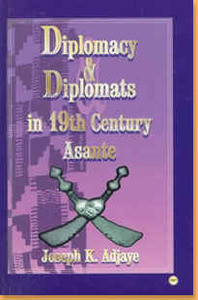 "...breaks new ground in African Studies... Gives a new perspective on the nature of Asante, and provides a model for the study of the diplomatic practices of other African states in the past... The principles and concepts embodied in Asante diplomatic practices should indeed, provide modern African states with valuable lessons" E. J. Alagoa, University of Port Harcourt

"Diplomacy, Adjaye reminds us in this useful and thorough study, was not the (exclusive) preserve of literate states" David Killingray, University of London

"One hopes that this book will be read not just by African specialists, but also by all who are interested in diplomacy and international relations. The evolution in Asante of a bureaucracy for international affairs shows astonishing parallels with the emergence of similar institutions much earlier in Europe..." J.E. Flint, Dalhousie University

A Melville J. Herskovits finalist and a Choice Magazine "outstanding academic book," this pioneering work remains the only book-length study of indigenous diplomatic patterns in Asante - or, for that matter, in any traditional African state. This in-depth analysis of the personnel, procedures, and institutions behind Asante's International relations with its Englsh-, Dutch-, Dannish-, and Arabic-speaking neighbors documents that that nation's diplomatic expertise and sophistication were on par with diplomatic practice elsewhere as well as with so-called "modern" diplomacy. The book also provides an excellent bibliography, a useful glossary of terminology, and a comprehensive index.