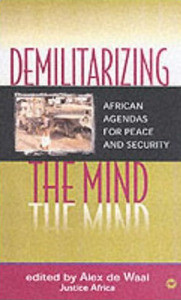 This book highlights a central, but neglected component of Africa’s complicated and intractable wars: the militarization of governance. Political cultures of militarism stand in the way of enduring peace, democracy, and the development of civil society. Militarism comes in both right-wing and left-wing guises—the latter practiced by former liberation fronts in power across much of Africa which have all betrayed the ideals that enthused their earlier struggles.

Seven comparative essays, drawn from the experience of conflict and peacemaking, focus on different aspects of militarism in contemporary Africa and ways of overcoming it.

·      How can we create a coherent, “joined-up” peacemaking that knits together the many tasks necessary for establishing peace in Africa?

·      Can Africa establish “security communities” at a trans-national level, abolishing both interstate conflict and the readiness of countries to intervene militarily in their neighbours’ affairs? What is the role of the African Union?

·      How can constitutional rule promote peace and security at a national and international level?

·    What are the political cultures of militarism in Africa today? How are we to understand the widespread phenomenon of left-wing militarism as manifest by former liberation fronts now ruling their countries?

·      How can key social groups, such as women, youth, and the poor, organize to promote peace?

·      What roles are played by mercenaries in modern African wars? Are we witnessing the “mercenarization” of war and the entanglement of commerce with conflict?

·      What are the challenges of post-conflict transitions to peace and democracy?

The essays, edited by Alex de Waal, are unsigned and based on contributions by African political leaders and policymakers. They represent some of the most innovative thinking on African security dilemmas.