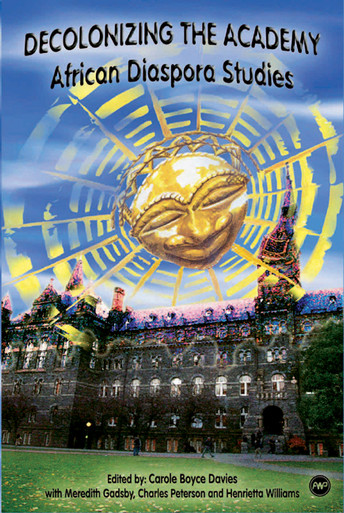 "Decolonizing the Academy" asserts that the academy is perhaps the most colonized space. As we enter the twenty-first century, this has become even clearer now that the academy is one of the primary sites for the production and re-production of ideas that serve the interests of colonizing powers. Operating at the macro level in terms of the state and at the micro level in various applications, these interests include the organization of the disciplines, the marginalization of interdisciplinary studies, the re-assertion of masculinities, and the operations of class, privilege, and hierarchy.

This collection of essays argues that African diaspora theory has the possibility of interrrupting the current colonizing process and re-engaging the decolonizing process at the level of the mind, as emphasized by Ngugi wa Thiongo in an earlier contribution. In addition, the collection asserts that this will be an ongoing project worthy of being undertaken in a variety of fields of study as we confront the challenges of the twenty-first century.

ABOUT THE AUTHOR
CAROLE BOYCE DAVIS is an active scholar in African diaspora and related studies. She has published several books, including "Migrations of the Subject: Black Women, Writing Identity," "Ngamibika: Studies of Women in African Literature," "The African Diaspora," "African Origins," and "New World Identities." She is currently the director of African-New World studies and a professor of English at Florida International University.

ABOUT THE EDITORIAL TEAM
MEREDITH GADSBY is an assistant professor of African American studies and English at Oberlin College.

CHARLES PETERSON is an assistant professor of African American studies and philosophy at Wooster College.

HENRIETTA WILLIAMS received her M.A. in African-New World studies from FIU and is a Ph.D. student in geography at University of North Carolina, Chapel Hill.