DARFUR, JEM AND THE KHALIL IBRAHIM STORY, With a Complete copy of The Black Book: Imbalance of Power and Wealth in the Sudan, by Abdullahi Osman El-Tom 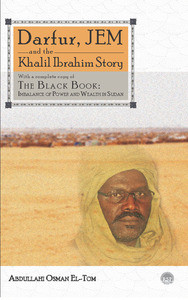 DARFUR, JEM AND THE KHALIL IBRAHIM STORY, With a Complete copy of The Black Book: Imbalance of Power and Wealth in the Sudan, by Abdullahi Osman El-Tom

In Darfur, JEM and the Khalil Ibrahim Story, the reader is offered a vivid portrait of the President of the Justice and Equality Movement (JEM) of the Sudan.  The author unobtrusively facilitates the encounter, withdrawing to leave the reader in direct engagement with Khalil in the narration of his life.

As this account of Khalil’s childhood shows, he was destined to endure his fortune and grow up in an environment that was rife with poverty, disease, famine and thirst.  Having lost his father in infancy, Khalil’s guardians arrived at a survival strategy whereby Khalil was to remain illiterate and take to herding animals, affording his siblings the chance to attend school.

Little did the family know that Khalil was endowed with a tremendous ability to transform even the most piteous chance into a promising opportunity.  Following derogatory comments by some of his contemporaries about his illiteracy, Khalil decided, without informing his family, to attempt enrolment in school.  His gamble paid off and he left the herding world behind.

Khalil joined the primary school with virtually no knowledge of Arabic as used in school and a tribal name (Hinain) that bore no relationship to his current name.  The Arab dominated culture of Sudan stipulated that he abandon his original name and discard his Zaghawa language in favour of Arabic, a rule that was enforced by public punishment in the school.

As he progressed through the school system, Khalil never parted company with the aspirations of his people for a dignified life away from poverty, famine and illiteracy.  In his pursuit of his people’s dreams, Khalil joined the Sudanese Socialist Union (SSU) and later the Islamic Front.  Like the SSU, the Islamic Front also promised to fulfil similar hopes for poor people in Darfur and beyond. Khalil’s journey with the Islamic Front led him to support the current government, taking several State Ministerial posts and fighting its jihadist wars.

Throughout his political career, Khalil knew that the Sudanese system was flawed.  Sudan was, and still is, ruled by a minority River Nile elite whose hegemony remains, irrespective of the nature of government in Khartoum.  As Khalil was later to learn, this hegemony could not be changed via peaceful means. The Islamic Front was the last staging post that Khalil and many others embraced before he helped to form JEM and take up arms against the very government for which he once fought.

As the biography of a once insignificant camel herder boy who rose to become a major geopolitical figure, this book provides key insights that will prove useful for readers interested in African governance, development, political systems, state formation, decolonisation, delivery of justice, human rights discourse, peace and conflict studies and multiculturalism.  Activists, NGOs, bilateral and multilateral actors in particular, not to mention African politicians in general, will find this book indispensible in their efforts to bring peace to Darfur and the Sudan at large.  It will also appeal to those endeavouring to avoid a repetition of past conflicts in other similarly failed states.

Part advocacy, part history, this is no ordinary biography.  Abdullahi El-Tom engages directly with an emerging political leader whose commitment to a future, fairer Sudan is rooted in his Darfur upbringing.  Khalil Ibrahim and the movement he leads, JEM, have already become a part of the long and continuing story of resistance by the marginalized Sudanese.  This book is essential reading for all those interested in the future of the country.

This book succeeds at many things simultaneously.  It is both biography and autobiography, travel narrative and homecoming tale, anthropological inquiry and political manifesto.  Above all, it is a book that is concerned with communication, and the paradoxical ways in which revolutionary ties are facilitated and frustrated in the twenty-first century.

Biographies of living African liberation Movement leaders are rare. In this book, Khalil Ibrahim unites the narrative and narrator in a compelling account of “why Darfurian’s rebel”. A must read, nuanced, engaging and thoroughly provocative.

Abdullahi Osman El-Tom, Ph.D. is Head of the Department of Anthropology, National University of Ireland, Maynooth, (NUIM), Ireland.  He was born in Darfur, Sudan but has been living in Ireland for the last two decades.  His publications include Growing up in Darfur, Sudan, SSC, Cairo (2007), Proverbs of Western Sudan, Jointly with A. Adam, SSC, Cairo (2002) and Globalisation: A critical Analysis, Jointly with A. Adam, Dar El Warraq, London 1999.