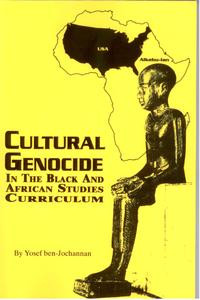 The question of who should determine course content and curriculum was hotly debated as Black and African studies programs were established and popularized in the early 1970's. Lines were drawn and pitched battles were fought  on college campuses and school district across America. Black activists, students and scholars demanded Black history be taught from a Black perspective. Dr. Yosef ben-Jochannan's incisive critique on this subject, Cultural Genocide in the Black and African Studies Curriculum, was published in 1972, enriching this important debate at a critical time.

Dr. Ben is at his best in his work. He argues with passionate certainty that there is a fatal contradiction when Blacks are fed a history of themselves based on materials written, controlled, and approved by whites. His arguments raise the powerful question: would whites (or any other group agree to embrace a history of themselves- created and controlled by Black?

The answer is absolutely not. To allow others to control your history is, at minimum, to risk being written into history as others see you. It is also, as Dr. Ben so forcefully warns, an act of giving others permission to erase African people from history. Having given this permission, we become accomplices in our own cultural genocide. Dr. Ben argues that leaving our history solely in the hands of white "scholars" is a risk we cannot afford.

Black Classic Press is pleased to republish Cultural Genocide. There is much we can glean today from this gem. The debate on the control and content of Black studies continues. Curricula and programs have been weakened, and threatened by the advent of "multiculturalism," and the false but increasingly popular belief that progress in race relations has made Black and African studies unnecessary. We believe the arguments in this seminal work will enlighten and resonate with a new generation; ensuring that our history is a life giving resource for African people and the world.