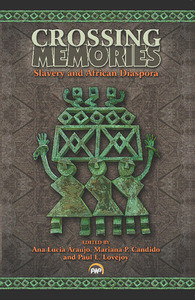 ABOUT THE EDITORS
Ana Lucia Araujo is an Assistant Professor in the Department of History at Howard University. Her research interests include the history and the memory of slavery and the Atlantic slave trade in the South Atlantic region. She published two single-authored books Romantisme tropical: l’aventure illustrée d’un peintre français au Brésil (2008) and Public Memory of Slavery: Victims and Perpetrators in the South Atlantic (2010). She also edited the volumes Living History: Encountering the Memory of the Heirs of Slavery (2009) and Paths of the Atlantic Slave Trade: Interactions, Identities, and Images (2011).

Mariana P. Candido is an Assistant Professor in the Department of History at Princeton University. Candido is the author of articles published in African Economic History, Slavery & Abolition, and edited volumes. She is the author of Fronteras de Esclavización: Esclavitud, Comercio e Identidad en Benguela, 1780–1850 published by El Colegio de Mexico Press and An African Slaving Port on the Atlantic World: Benguela and its Hinterland (Cambridge University Press, forthcoming). She is also a network professor of the Harriet Tubman Institute for Research on the Global Migrations of African People at York University, Canada and is also a collaborator at the project Naus do Purgatório: Escravidão e Tráfico Atlântico (Universidade Federal Fluminense, Brazil).

Paul E. Lovejoy Distinguished Research Professor and Fellow of the Royal Society of Canada, holds the Canada Research Chair in African Diaspora History and is Director, Harriet Tubman Institute for Research on the Global Migrations of African Peoples at York University. His recent publications include Slavery, Commerce and Production in West Africa: Slave Society in the Sokoto Caliphate (2005); Ecology and Ethnography of Muslim Trade in West Africa (2005); and The Biography of Mahommah Gardo Baquaqua: His Passage from Slavery to Freedom in Africa and America (2nd ed., 2006). He has also edited or co-edited various volumes on the African diaspora, including Trans-Atlantic Dimensions of Ethnicity in the African Diaspora (2004); Enslaving Connections: Western Africa and Brazil during the Era of Slavery (2004); and Slavery on the Frontiers of Islam (2004).