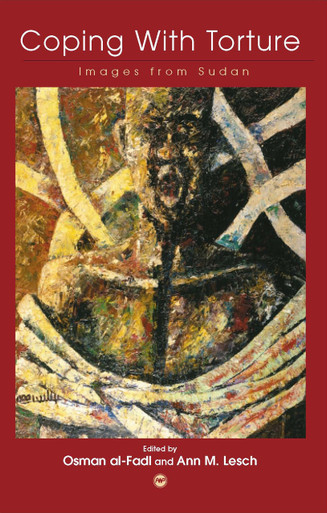 Stark paintings - some in brilliant colors and others in subdued tones - convey the horror of torture in the ghost houses in Khartoum and the agony of enslavement and dispossession in the Nuba mountains and southern Sudan. Originally exhibited in Cairo in 2000, these fifty-three art works express the pain suffered by Sudanese from all walks of life and all religious backgrounds during the period since the military coup d'état in June 1989.

The eight Sudanese artists accompany their paintings and sculptures with descriptions of their personal experiences before and after the coup. Several were detained and they all suffered from the restrictions imposed by the regime on the teaching and expression of visual arts. They left Sudan at various times, for Egypt and then other countries. They view their contributions to the exhibit in Cairo and to this volume as a way to expose the violations of human rights in Sudan and also to promote peace and justice in their country, retrieve the rights of minority peoples, and restore artists' freedom to express their creativity and realize their innate talents.

Quotes from the book:

Mohamed El Rayah Ibrahim Kodi:
"In the Sudan people are tortured because their beliefs and views differ from the views of the state.... [In the art exhibit] my message to my fellow countrymen was that we all should contribute to peace making."

Asaad Sami Komi:
"I believe that works of art...are among the most powerful weapons for combating these regimes and the most powerful in preserving cultures, raising the consciousness and cultural level of those who are culturally oppressed, and assuring the dissemination of these cultures as widely as possible."

ABOUT THE EDITORS
OSMAN AL-FADL was professor of water management and environment and dean of the Faculty of Agricultural Sciences at Gezira University. He coordinated the Cairo office of the Sudan Organisation Against Torture (formerly, Sudan Victims of Torture Group) and organized the art exhibit from which this volume emerged.

ANN M. LESCH, professor of political science at Villanova University, is a former president of the Sudan Studies Association. She wrote The Sudan: Contested National Identities (1998) and co-authored with Steven Wöndu Battle for Peace in Sudan: An Analysis of the Abuja Conferences, 1992-1993(2000).