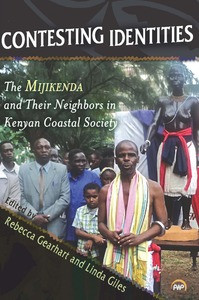 The book aims for a grounded understanding of the complexity of coastal society. Whereas some chapters advance new theoretical interpretations, especially in regard to history, this volume does not focus on academic theory for theory’s sake but rather on a detailed ethnographic and historical examination for a broad audience who seeks a better understanding of the nature of Kenyan coastal society. The work also embraces engaged research rather than insisting on the detached stance often favored by older traditions of academic research.  It thus presents views of Kenyan coastal communities as well as those of Mijikenda scholars and activists and does not shy away from advocacy on behalf of the communities studied.  The volume is dedicated to the late Mijikenda scholar-activist Katama Mkangi.

The volume is divided into four sections.  Section A: “Reinterpreting the Past” presents groundbreaking archaeological and linguistic evidence that sheds light on the kinds of interactions coastal populations have had with interior and hinterland peoples, and the degree to which these interactions shaped the Mijikenda and their neighbors. Section B: “Perspectives on Identity” examines social identity and the symbols and activities that represent ethnicity in various Kenyan coastal communities. Section C: “Cultural Contestations” explores structures of inequality among coastal peoples as well as challenges to such marginalization. The essays in Section D: “Contemporary Movements” call attention to the ways in which contemporary campaigns for cultural preservation and environmental protection are interlinked on the Kenyan coast, and how these movements are being generated from the combined efforts of local community members, Mijikenda and Western scholars, and personnel at the National Museums of Kenya.

Rebecca Gearhart is an Associate Professor of Anthropology at Illinois Wesleyan University.

Dr. Gearhart takes an interdisciplinary approach (visual anthropology, history, performance studies) to her research on non-Western expressive arts, primarily among the peoples of coastal Kenya.  She received a Ph.D. in Anthropology from the University of Florida at Gainesville.