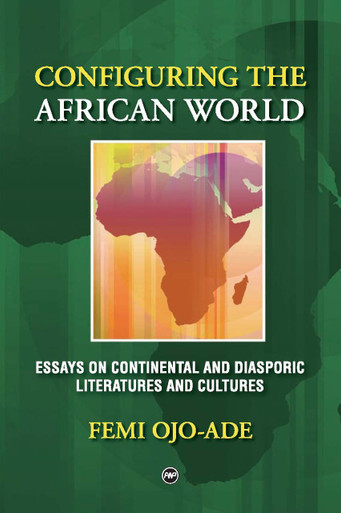 Some of the essays in Configuring The African World were published in Nigeria a few years ago (On Black Culture, Obafemi Awolowo University Press). That edition is now out of print; nonetheless, the essays remain relevant. The present text contains new chapters which serve as a continuation of Ojo-Ades exploration and explication of African continental and diasporic cultures. Culture is defined as the totality of a peoples way of life, forged by essence and experience. The critic, a polyglot (Yoruba, English, French, Spanish, and Portuguese) with a broad-based background, analyzes the works of major figures of Africana, from the ancestral continent, Brazil, Cuba, Martinique, Guyane, Haiti, Jamaica, the United States, Britain, France, and elsewhere. Besides literature, he delves into diverse expressions of culture, including film, music, television, and debunks myriad aspects of the inferior image of Africa projected to the Western world by so-called experts. He discusses themes, such as language, colonialism, neo-colonialism, religion, socio-political realities, and economics, all with a view to assessing Culture, its past, present, and future, its triumphs and travails. The reality recognized by the author, sad to say, is one of dilemma for Africa and Africans. However, there is reason for hope, rather than despair because Africans have always displayed the resilience and resistance necessary for survival in a global village that continues to marginalize them.

As an award-winning creative writer, Ojo-Ade also reflects upon his art from the vantage point of a committed African encountering the implacable West. With his usual forthrightness and integrity, he challenges himself and others to face the facts of cultural imperialism, and to engage in the process of re-valuation of Self and Society so that Africas children the world over may regain their humanity.

The whole text, marked by poignancy and satire, constitutes one more call to consciousness and action, a reawakening necessary for authentic fight for freedom from the shackles of neo-colonialism visited upon the people by so-called democratic leaders best described as alienated dictators.

Femi Ojo-Ade has grappled creatively in this book with an abiding problem in Africana experience: the issue of multiple identifies for Africans whose cultural space is divided into several languages and color shades.

The author provides convincing evidence to show that physical and cultural enslavement of peoples of African descent appears to have acquired the status of a river that empties itself into a delta of globalizationa new euphemism for a new strategy of economic and cultural domination of Africa and its diaspora. He calls unequivocally for a new pan-Africanist energy that must include the willingness of Africans and African-Americans as well as Afro-Brazilians to tell one another the bitter truth about their common marginalization in todays world, despite the images of difference between Africans and African-Americans being projected by the Western media.

ABOUT THE AUTHOR
FEMI OJO-ADE became the second Nigerian to become full professor of French in a Nigerian university in 1980 (Obafemi Awolowo University, Ile-Ife). He has worked in universities and colleges on the continents of Africa, South America, and North America. He was formerly Chair of the Department of Foreign Languages at Obafemi Awolowo University, Ile-Ife. He has just been elevated to the status of Professor Emeritus by St. Mary's College of Maryland where he has been working since 1990. A vastly published and internationally recognized scholar in Black literature and culture, he is also a creative writer. His latest creative offering is the short-story collection, Dreamers (Amoge Publishers, Nigeria/African Heritage Press, USA). Among his forthcoming critical works are: Abami-Eda, on the late Afrobeat musician and activist, Fela Anikulapo-Kuti, and a study of the life and work of the acclaimed father of Negritude, Aime Cesaire.